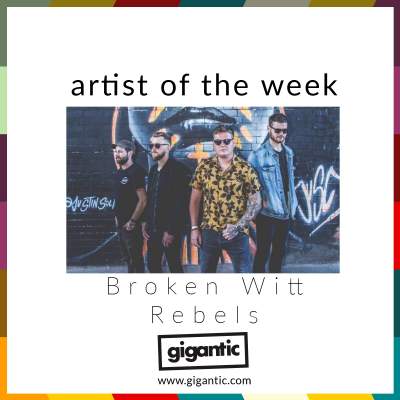 Broken Witt Rebels are the Birmingham band loaded full of emotion and attitude. Taking their cues from both Americana acts and British indie style, they have concocted a unique blend of husky vocals, driving guitars and country tinged anthems.

Having just dropped stunning second album ‘OK Hotel’ which begins to incorporate elements of pop and will likely see them break into the big time, the boys have announced an extensive September tour to show off their fantastic new material!

Lifelong friends: singer Danny Core and bassist Luke Davis grew up in a Birmingham council estate found close to the city centre. Inspired by the post millennium rock and roll revival, the pair picked up guitars from Argos and started learning riffs from such favourite bands as The Libertines and Arctic Monkeys – playing songs at their local indie night. But it was Kings Of Leon that would have the greatest impact and would come to play a pivotal influence on their direction.

They formed Broken Witt Rebels in 2015 and began to develop their distinct character independently, self-releasing EPs which clearly displayed their love of blues rock and was hard for listers to believe that they weren’t all Nashville born boys. Gigging heavily around the UK and the rest of Europe, they built a sizable following which grew even larger when they played support for famed Texan rockers Whisky Myers in the US and for a Blue October tour which took them all around the continent.

Proven to be a formidable live experience, they would find themselves play prominent slots at such major festivals as Reading \ Leeds, Download, Wacken Open Air, Camden Rocks and The Great Escape.

In 2017, the midlands fourpiece dropped their eponymously titled debut album which quickly established the band as one’s to watch. Steeped in southern blues rock, it was a huge hit with both the critics and their quite considerable fanbase. The passion and raw earthy feel set hearts aflame as Broken Witt Rebels could truly say they has arrived.

This building momentum has seen the lads sign to Snakefarm Records, an imprint for Universal Music, which has given them huge back and international reach. Ready to take on the world once again, Broken Witt Rebels came back earlier this month with second LP ‘OK Hotel’ which has seen them develop their sound even further.

Kicking off with life affirming lead single ‘Running With The Wolves’, it’s clear from the very first track that they have began to broaden their style to take on board more pop influences.

“It’s a song about not waiting for things to happen and taking opportunities when they come up. If you want it, go get it and make your own destiny no matter what the hurdles are. Don’t let anyone hold you back.” – Danny Core

Certainly the title track has the huge anthemic appeal that could see them rise through the charts and songs like ‘Money’, ‘Caught In The Middle’, ‘Take You Home’ and ‘Rich Get Richer’ perfectly meld Core’s old worldly drawl with sharp beats for maximum impact.

Not forgetting their roots, the album ends with the sentimental track ‘Birmingham’ which reminisces about those hard-won victories, the growing pains that come with achieving adulthood and (of course) football.

“I can’t remember there being a song about Birmingham, unless it’s Birmingham Alabama. But these are our experiences, this is where we’re from; the line ‘a broken blue nose is poetry in motion, and all the villains have broken bones’, that’s referring to the football clubs Aston Villa and Birmingham City, they were always fighting… Football has always been part of our culture growing up, so we wanted to get these kind of references in.” – Danny Core

Broken Witt Rebels are once again hitting the road to show off the new material from ‘OK Hotel’ plus play tracks from their first album. Clearly destined to be one of the biggest British bands in the near future, be sure to see them when they tour in September.