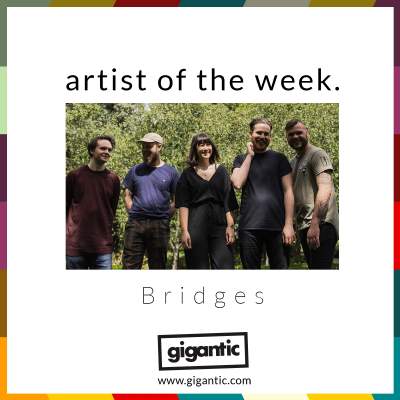 BRIDGES are an absolute must for those looking for poignant music that speaks to the soul. Impassioned vocals are joined with huge harmonies causing a rush of emotion as the songs overflow with warmth.

"A soaring emotional beast that melts your heart." – Tap The Feed

"Born in the same house as Frightened Rabbit and The Gaslight Anthem the quartet clearly have their eyes set on filling the stadium-sized hole their songs demand." – Far Out Magazine

Formed in 2012, BRIDGES were off to a flying start when they won ‘Best Band’ at a ‘Rock The House’ competition in London just a year later. The prize was a chance to play at the House of Commons which may be a slightly strange gig venue, but it was enough to raise their profile enough for bookers to take notice and have since made prominent appearances at such prestigious festivals as Leeds, Glastonbury. Dot To Dot, 2000 Trees and Isle of Wight.

Entering the studio, their debut single was the raw yet uplifting song ‘Reverie’ which with its bright tones and anthemic feel felt more like a release by seasoned pros rather than their very first release. It would be followed by second single ‘BFF’ which took a more dramatic direction and it was this emotionally charged feel that grabbed the attention of the online press and saw them named by Noizze as their ‘Track of the Day’.

The quality of their studio output has remined high and in 2019 BRIDGES dropped their first EP; ‘On And On Like This’. The four tracks begin with two singles; their huge anthem ‘Maths, Science and English’ plus driving number ‘Ghouls’. They are followed by the delicately beautiful song and the overwhelming joy found in the finisher ‘Sunday’.

More recently, they have released the singles ‘Wishbone’ which glisten with an icy resplendence before rising to lofty heights of pure bliss and ‘Stole The Words’ which unfolds the first flourishes of young love and elevates the passion to a truly cinematic scale.

This year, BRIDGES have announced a huge headline tour for Spring allowing you the chance to hear them play their awesome singles live. These unmissable nights follow sold-out dates in their Somerset hometown Bridgwater plus Dublin and these upcoming shows are also expected to follow suit. So, make sure you book your ticket to Gigantic and look forward to seeing a band on the rise as they begin to play even bigger stages.