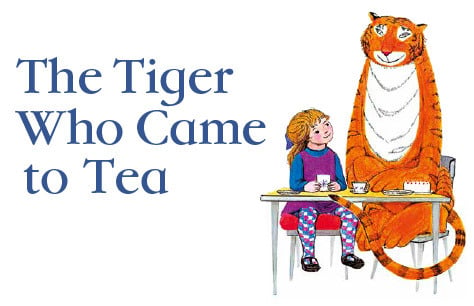 The Tiger Who Came to Tea

The Tiger Who Came to Tea in the West End this Summer!

The Theatre Royal Haymarket or Haymarket Theatre is a theatre on The Haymarket in London which dates back to 1720. The original building was a little further north in the same street. It has been at its current location since 1821, when it was redesigned by John Nash. Its current capacity is 888.

The Haymarket has been the site of a couple of significant innovations in theatre. In 1873, it was the venue for the first scheduled matinée performance, establishing a custom soon followed in theatres everywhere. Six years later, its auditorium was reconstructed and the stage was enclosed in the first use of the picture frame proscenium.

The Theatre Royal Haymarket's first major success was a 1729 production of Samuel Johnson's Hurlothrumbo, or The Supernatural, which ran for 80 nights -- a record surpassing John Gay's The Beggar's Opera and not to be matched until The Dragon of Wantley. In the 1720's, the Haymarket was an alternative to the patent theatres in every sense. When there was an actor's revolt at Theatre Royal, Drury Lane in 1719, for example, the actors walked out to go to the Haymarket. They returned when they won their demands. In the eight to ten years before the Licensing Act of 1737, the Haymarket Theatre was an alternative to John Rich's Covent Garden theatre and the opera-dominated Theatre Royal Drury Lane. Hurlothrumbo was just one play in that series of anti-Walpolean satires. Henry Fielding staged his plays at the Haymarket Theatre, and so did Henry Carey. Hurlothrumbo would be followed by Tom Thumb, The Dragon of Wantley, Pasquin and others. Additionally, refugees from Drury Lane's and Covent Gardens's internal struggles would show up at the theatre, and thus Charlotte Charke would act there in a parody of her father, Colley Cibber, one of the owners and managers of Drury Lane. The Theatrical Licensing Act, however, put an end to the anti-ministry satires, and it all but entirely shut down the theatre.

In 1862, the theatre was host to a 400-night run of Our American Cousin, with Edward Southern as Lord Dundreary. The play's success brought the word "dreary" into common use.

In 1893, Oscar Wilde premiered A Woman of No Importance, his first comedy. The play returned for a 2003 production directed by Adrian Noble and starring Rupert Graves, Samantha Bond, Prunella Scales and Rachael Stirling.

The theatre underwent a major refurbishment in 1994. In May 2004 it closed for two nights after parts of the ceiling fell down during a performance. About 13 people suffered mainly cuts and bruises when plaster fell into the auditorium during the "When Harry Met Sally..." Show. Since then, the theatre has played host to a short-lived run of Becket directed by John Caird followed in January 2005 by the world premiere of Victoria Wood's new musical Acorn Antiques - based upon the TV series of the same name. This starred Julie Walters, Celia Imrie, Duncan Preston, Neil Morrissey, Sally Ann Triplett and Josie Lawrence and ran until 21 May 2005. The Genius Of Ray Charles - a new American musical followed in the Summer of 2005 running for eight weeks to 13 August 2005. More recently, Bill Kenwright's new production of A Few Good Men played to packed houses starring Rob Lowe, Suranne Jones, John Barrowman and Jack Ellis.

In June 2018, the theatre was purchased by Access Entertainment for a rumoured £45 million. Access Entertainment is a global division of Leonard Blavatnik's Access Industries that invests in television, film and theatre acquisitions. Blavatnik is a Ukrainian-born entrepreneur and owner of Warner Music Group, and he currently ranks third in the Sunday Times Rich List with a net worth estimated at £15.3 billion.