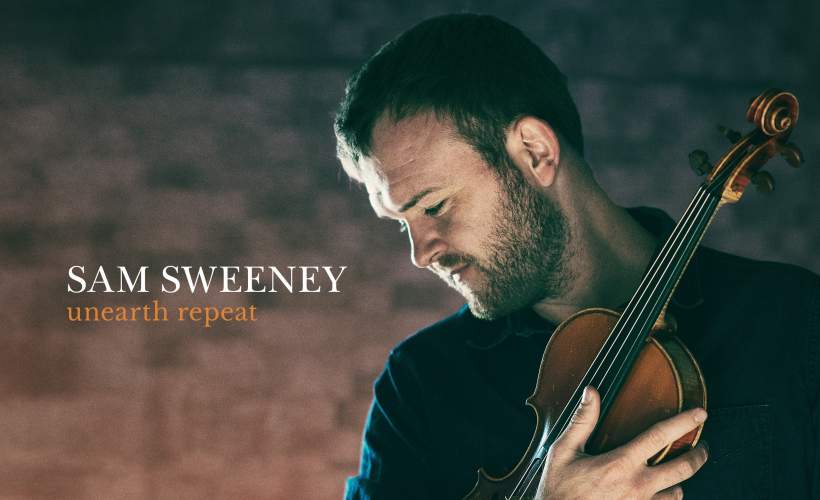 A veteran of the mighty Bellowhead’s domination of British folk for ten years, artistic director of the National Folk Youth Ensemble, founder member of the acclaimed instrumental trio Leveret, and a superb instrumentalist at the forefront of the revival in English traditional music, Sam Sweeney has signed with Island Records to release his first solo album, The Unfinished Violin, an expansion and development of his acclaimed live show, Sam Sweeney’s Fiddle: Made In The Great War, which toured to great acclaim from 2014 to last year.

Appearing alongside Sweeney on the album are Rob Harbron, guitarist Jack Rutter, pianist Becky Price, double bassist Ben Nicholls and a brass and string section. It’s apt that the last recording sessions were at erstwhile Island stablemates Fairport Convention’s studio in Oxfordshire, underlining the label’s rich history in supporting British folk. Sam signed to the label following an appearance on BBC Radio 4, to talk about Made In The Great War. Island Records subsequently invited Sam to create an album of the kind of music Richard Howard’s violin would have played had it been assembled at the time of its making.

Alongside Bellowhead duties, Sweeney has also released two fine albums with Hannah James, appeared on albums and stages with the likes of Eliza Carthy, Fay Hield and Sam Carter, been a part of the acclaimed Full English project, won the 2015 BBC Radio 2 Folk Award for Musician of the Year, and since 2014 has toured and recorded with Rob Harbron and Andy Cutting as Leveret.

Sam Sweeney has just announced major headline dates for the new year. We are very excited to be able to offer you tickets to see him play Cambridge Junction 2 and The University Of Sheffield Drama Studio during May 2020.

After embarking on a solo career, releasing his debut solo album The Unfinished Violin on Island Records and touring it to sell-out crowds in 2019, Sam is releasing his highly anticipated second solo album, Unearth Repeat, on Hudson Records in March 2020.

Moving on from his five year connection to the First World War, which inspired his first album and captured the nation’s hearts through appearances on Antiques Roadshow and BBC Breakfast, alongside BBC Radio 2, 3, 4 and 6Music, Sam is making music on his own terms, with a stellar line up of his favourite musicians and a massive sound.

Unearth Repeat celebrates a new direction, not only for Sam but for English music. His new band are injecting into the tradition something that has never been heard before. The music has the groove and swagger of traditional English music with the huge sound, flare, energy and festival spirit of bands coming out of the Celtic and Scandinavian music scenes.

Nominated four times, and winner in 2015, of Musician Of The Year BBC Radio 2 Folk Awards, Sam is a veteran of the mighty Bellowhead, former and inaugural artistic director of the National Folk Youth Ensemble, founder member of the acclaimed instrumental trio Leveret, and a superb instrumentalist at the forefront of the revival in English traditional music. Sam has also recorded and performed with The Full English, Eliza Carthy, Jon Boden & The Remnant Kings, Fay Hield & The Hurricane Party, Emily Portman, Martin Carthy, as well as his own critically acclaimed show Made In The Great War.

“The fiddler with the Midas touch… an English equivalent of the great Irish fiddle player Martin Hayes.” - The Guardian

“Sweeney’s playing is unearthly at times: the singular focus of this set and the level of its performance makes this an outstanding and deeply moving experience.” - Songlines

Make sure you grab your Sam Sweeney concert tickets quickly - with only limited amounts being made available by promoters they are expected to sell out quickly! Fortunately, Gigantic has an award winning customer service which means selecting and booking tickets is made easy.

Gigantic is always the best for gig and festival tickets with more being added to our growing selection every single day - keep checking our site plus reading our blogs to see what we have on offer. Plus, we send out the latest live music news through our emails so make sure you subscribe plus Like & Follow us on Facebook, Twitter and Instagram.