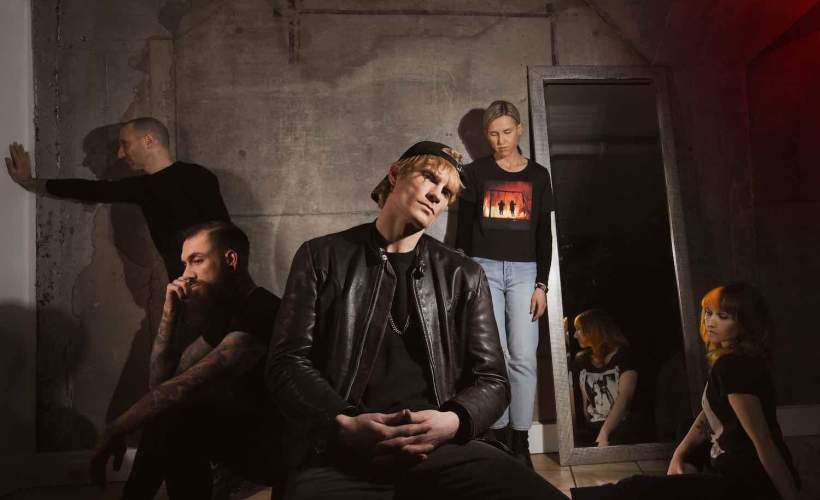 When the world prevents you from going outside there’s no other choice but to lean inward. The old adage “It starts from within” takes on a whole new meaning during a global pandemic, a poignant theme that threads through Vancouver indie rock bandMother Mother’seighth full-length albumInside. Written during the first wave of the COVID-19 pandemic,Insidesees band frontman and songwriterRyanGuldemondseeking inspiration through self-discovery and reflection.“The world stopped, and all of sudden I had a lot more alone-time on my hands, which isn’t necessarily conducive to songwriting,” Ryan says. “Usually, I like to venture out and find guidance from an external, interactive narrative - travelling, people, serendipities etc. I love that process - it’s almost like you’re in collaboration with the world. But since that wasn’t an option, I set about a different kind of travel, one more inward and personal, exploring different types of therapies, meditation, and journaling as a means to unearth songsfrom a deeper, interior place.”After several months of writing and recording demos in his home, Ryan and the band-which includes singer/keyboardist Jasmin Parkin, drummer Ali Siadat, bassist and multi-instrumentalist Mike Young, and Ryan’s sister, singer/keyboardist Molly Guldemond (who also handles all of the band’s design and creative direction)-joined producerHoward Redekoppin Afterlife studios’ expansive live room in Vancouver last June. Redekopp worked with the band on their first two albums, including the band’s 2007 debutTouch Upand 2008 fan-favoriteO My Heart. The goal was to infuse the songs with a living, breathing energy, and the focus was more on how the album should feel, rather than how it should sound. The layers of instrumentationand rich vocal harmonies and interplay between Ryan, Molly and Jasmin are often as introspective as the lyrics, asMother Motherventures deep within to heal from the inherent suffering that is part and parcel of the human condition.“I Got Love,”a propulsive, thumping cut, was Ryan’s entry point toInside, emerging from what he calls “sheer, unbridled, joyful energy” and giving the songwriter the confidence he needed to continue on the album’s journey. High-energy track“Sick of the Silence”considers the internal cacophony that can come after the world goes quiet, bringing chaos into the mind and urging distraction.“Weep”pairs folk and industrial influence as Ryan inquires, “There is a place where it hurts the most, but will I go there and weep into my birth?”“The Knack,”the album’s only song about romantic love, begs for a change to the games we play in relationships, while“Forgotten Souls”redefines success, centering on its ever-relevant lyric“The garden grows in frozen rain.”“We often link success to external motion: climbing corporate ladders, seizing opportunities, or for a band, going on tour. When we’re stripped of these tangible markers, it can feel like the growth of our life stops completely.” Ryan explains. “But the soul is always evolving and expanding, just with the passing of time. A different kind of soil turns over when
we’re still and just simply being. That lyric is definitely a thematic pillar onInside, and has become a bit of a mantra for myself during this time.”“Pure Love”is a standout moment on the album and marks the first time inMother Mother’scareer that Ryan hasn’t penned a single lyric in a song. He took the initial refrain from a voice memo sent to him by a friend, and then asked his sisterMolly,who sings the meditative, ethereal song, to expand on the emotional theme of the track. “It really felt like it came from elsewhere, a celestial kind of place,” Ryan notes. “It’s about the awe-struck mystery of being alive, and the modality of self-love through which to live life fully.”In many ways,Insideexpands onMother Mother’sprolific career, and connects them back to the origins of their success. In the summer of 2020, the band began to notice that fans were flocking to streaming services in unprecedented numbers to listen to their older catalogue. It was revealed that some of their formative songs, including“Hayloft,”“Arms Tonite”and“Wrecking Ball,”had become recent Tik-Tok hits, connecting them with an entirely new generationof fans. It was a welcomed reinvigoration ahead of the release ofInside. For the band, who have toured extensively over the years, regularly selling out shows in New York, London, Los Angeles and Toronto, finding new fans with old music is simply part ofthe journey. It’s been a surprise to see their early songs all over TikTok, but it also makes sense with the band’s natural evolution.“It feels like a big, surreal gift from the universe,” says Ryan. “For us, it’s always been about the joy of music, and sharing in this joy with others, so the more the merrier, and it doesn’t really matter if it’s an old or new song someone is connecting to. Songs don’t understand the concept of time. They’re eternal.”In many ways,InsidebringsMother Motherfull circle, reuniting the band with Howard and reminding Ryan that the best creation begins by reflecting on yourself rather than what’s around you. And whileInsidedabbles in darkness, it’s ultimately about love and healing in the face of challenges and turbulent world circumstances. It may see Ryan and his bandmates looking within, but it also asks the listeners to consider themselves as well, finding collective moments of catharsis through internal validation rather than our usual external outlook. And, as they look inward, the songs shine back out with love and hope.“Writing Insidewas certainly therapeutic, but then again, creativity always is when it’s honest and channelled. If people enjoy this music, we are happy and grateful, and if they find any healing in it, slight or profound, we’re ecstatic and deeply humbled,” Ryan says. “Even though these themes centre around the human struggle, they’re underpinned by that struggle being worth it for the sake of coming out a little more whole. When we’re betterfor ourselves, we’re better for our family, our community, and the world. And we’re better for the music we make.”