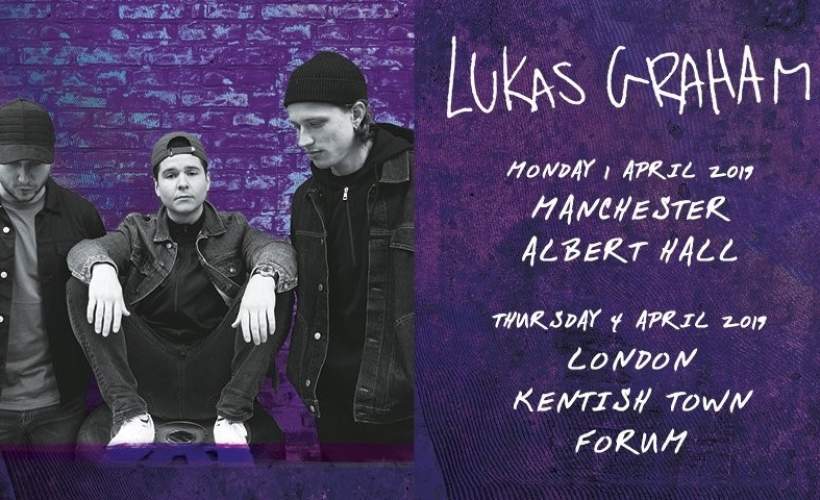 Lukas Graham is the massive R&B influenced pop sensation. The band draw on elements of hip hop and folk and is currently winning the entire world over.

See him perform at Manchester Albert Hall and O2 Forum in London during April 2019.

Get excited, because Gigantic can now offer you Lukas Graham tickets. But do not hang around because demand is high and they will sell out very quickly. Fortunately, we make placing your gig tickets order nice and easy by enabling access to our site 24/7 using your computer, smartphone or tablet whilst relaxing at home or busy and on the go.


The band centres around the singer Lukas Graham Forchhammer who grew up in the idyllic region of Christiania. The area has declared itself autonomous to the rest of Copenhagen and is known as a bohemian neighbourhood where culture and creativity flourishes. Growing up in such an artistic community certainly encouraged and stimulated Forchhammer talents.

Taking the role of lead singer, Forchhammer is joined by drummer Mark Falgren, Kasper Duagaard on keys and with Magnus Larsson playing bass to complete the band.

First stating in 2011, they made their bid for notoriety through uploading DIY videos of their songs Drunk In The Morning and Criminal Mind. The daring bid worked as the videos grabbed the attention of Copenhagen Records and earned them a contract with the label. By the end of 2012 Lukas Graham had played 107 concerts right across Europe, selling 40,000 tickets in their home country of Denmark alone. The year also saw the release of their self-titled debut album which sold 80,000 copies in 2012 and would go on to be certified Platinum five times in Denmark. They would sell 150,000 singles and see their YouTube videos streamed an amazing 27 million times.

Their second album was released in 2015 and is also eponymously titled, although it is nicknamed the Blue Album by fans, and hit #1 in the Denmark Album Charts. The record contained the songs Mama Said, Strip No More and the massive hit 7 Years which soared to #1 on the singles chart right across Europe including Denmark, Belgium, Sweden, Austria, Italy and more. The music video has now been watched over 50 million times on YouTube and has been streamed over 225 million times.

The excitement continues to build and we expect Lukas Graham concert tickets to sell very fast. Plus, with only limited amounts being put on sale by the event organisers, you will have to act quickly and place your booking before they all go. If you have any questions, then contact our dedicated customer service team who can assist with every question when selecting from our huge range of essential gig tickets. Remember, award winning ticket vendor Gigantic is the very best place to come to make a stress-free booking before enjoying your big night out.

Lukas Graham To Tour The UK

Verified purchase
Love someone was amazing

Second time I've seen Lukas Graham and he was amazing once again! i was a little bit sad that he didn't play my favourite song though "Unhappy" from The Purple Album.

So so good! Full of energy, and such a quality performance, loved it 😊

Lukas graham was fantastic best ever concert by far

That's all we have for Lukas Graham! Check out their upcoming shows