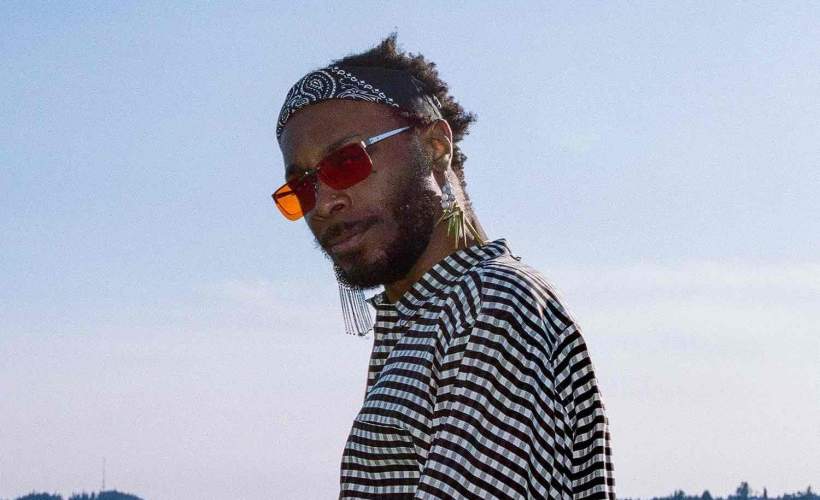 JPEGMAFIA will be playing at London EartH on Friday 6th of March 2020.

JPEGMAFIA is often praised for his ability to create music that seamlessly joins an array of emotions, sounds, and subject matter in a way that many haven’t heard up to this point. Though his approach might be new to some listeners, the LA-based rapper and producer’s journey through life, in many ways, predestined him for this kind of musical versatility. In his early years, Peggy was raised in Brooklyn, New York by Jamaican parents. Then, as a preteen, he moved to rural Alabama, a place where he’d have to face a type of racism that was unrelenting in comparison to his experiences on the East Coast. Those early, contentious encounters led a young JPEG to gravitate towards early Ice Cube records, which spoke directly to what he was dealing with at the time. Cube’s clever, intellectual, and militant approach led Peggy to making his own music in his early high school years, joining the LA rapper’s style with the flamboyance of artists like Cam’Ron back home in NYC.

After graduating high school, JPEG enlisted in the military, deploying to various corners of the world where he’d pick up a little bit of influence from each locale. None would prove to be more crucial than his move to Baltimore in 2014. A few months after he arrived, the city erupted in a fiery uprising in response to the death of 25-year-old Freddie Gray at the hands of Baltimore City Police. The city’s passion and absence of fear when standing up to local law enforcement had a profound effect on Peggy, who’d only witnessed scenes like those while on active duty outside of The States. It led him to crafting two projects that helped him catch the eyes of people across the country and the internet. 2015’s Darkskin Manson, eerie in sound and content, was his first project as JPEGMAFIA and a direct response to what he saw happening on Baltimore streets between citizens and police. Songs like “Mask on the Masters” and “Cops are the Target” featured haunting vocals that channelled his anger and mind-twisting production that only bolstered those sentiments. That project’s follow up, 2016’s Black Ben Carson, featured even wackier production and satire, poking fun at people like Ben Carson and Stacey Dash, who, at the time, were making questionable political statements that felt detrimental to black progress.

Though he relocated to Los Angeles in late 2017 to further his music pursuits, Baltimore City is still the foundation and main source of inspiration for Peggy’s artistry. In a 2018 documentary by The FADER based around his relationship to the city, he said, “The music out of this scene, I felt it the most out of anything. It’s something deeper - it’s harsher, it’s more painful, it’s more soulful. It’s still something different about it to me.”

t was in Los Angeles that JPEG released his breakthrough album, Veteran, at the top of 2018. In comparison to his first two projects, which were conceptual pieces, Veteran essentially served as Peggy’s autobiographical introduction to the world and his most versatile display of his skillset up to that point. The album established JPEGMAFIA as one of the more exciting artists that rap has to offer, due to his ability to make political commentary and the concerns of American millennials engaging, humorous, and informative all at once. The album changed his life. In the year following Veteran, he became a mainstay in American media, the festival circuit, and soon would begin receiving praise and admiration from musical titans such as Rick Rubin and James Blake, among others.

Now, after one of the more impressive introductory runs for a new artist in recent memory, JPEG is mastering his ability to strip the music down to a point of being more transparent, all while maintaining what made people fall in love with him in the first place. That’s where his new album, All My Heroes Are Cornballs, comes in. The 18-track project follows in the footsteps of his earlier work, in that, as a listener, you step into uncharted territory whenever you press play on any of Peggy’s songs. The beautiful remnants of jazz piano in the first half of album cut “Keenan vs. Kel” serenade you to a relaxed state before pounding drums and bass come into play. He appropriately ends that song with an ominous declaration - “You think you know me” - which is a fitting way to frame the rest of the album.

“When I went into this I had a completely blank head. I didn’t want to think about anything,” JPEG says of All My Heroes Are Cornballs. “I didn’t wanna go into it with no preconceived anything. I just knew I wanted to make something in a space and time. When you just leaving it all out there, it kinda happens that way.” That creative approach may explain why the album has more naturally personal moments than last year’s Veteran, but even with that addition, in true Peggy fashion, it mostly shows up in spurts. “Prone!” spends the majority of its duration being a platform for JPEG to let off steam and frustration, but by its end, he slyly fits in interpolations of Jamaican singer Wayne Wonder’s hit “No Letting Go.” Directly after, 61-second cut “Life’s Hard, Here’s a Song About Sorrel” is a short love letter to a drink popular in Caribbean households. Both instances are a subtle nod to his heritage. Moments like these are sprinkled all throughout All My Heroes Are Cornballs and they suggests that, while JPEGMAFIA will remain the cerebral off-kilter jack of all trades (take the title track that goes from referencing Drake melodies to name dropping both Anne Hathaway and Ann Coulter), he’s entering a space where it feels necessary to bare more of himself to those who’ve gotten him to this point.

That way of thinking, he says, comes after finally breaking into an industry he’s been targeting for the better half of his life, only to realize that so many of the people he idolized are disappointingly disingenuous. All My Heroes Are Cornballs is, in some part, him grappling with that lightbulb moment, but more importantly, him making sure he doesn’t replicate their deficiencies. “When you put the scope of today - when we know more about people’s intentions - and you put it back on some of these people, you realize that they’re not really who you thought they were in any way, shape, or form,” he says. “This album is my real-life realization.”

As there are only limited JPEGMAFIA, concert tickets available you will need to act fast and book quickly. Gigantic has been proudly providing excellent customer service for over ten years. That level of experience and dedication means we are the right place to book your essential gig tickets whenever you are planning your big night out.

Best crowd I’ve been in, great venue for the size of the crowd

That's all we have for JPEGMAFIA! Check out their upcoming shows