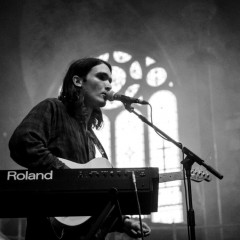 Tweet
Horsebeach will be smashing it at Thousand Island in London and Night People at Manchester during April 2020.

Following on from the rapturous welcome they received at The Albert Hall in Manchester supporting Mac DeMarco, Ryan Kennedy takes his Horsebeach vehicle on the road to commence promotion of the second LP II.

Comparisons to the oeuvre of Captured tracks and Felt continue but the work of Horsebeach has a unique identity, fusing the atmosphere of the damp Manchester streets with a sunny perspective.

Written, produced and recorded straight to tape in Ryans central Manchester studio, Ryan has taken his blueprint to the next level on this LP and the confidence gained from his live performances in support of the debut LP shines through.

Opening with the subtle rumble of early morning Chinatown, a hazy instrumental sharpens into focus with languid guitars, gently welcoming you into a dream of Kennedy's creation.
The summery groove and pop majesty of 'It's Alright' soon sends you spinning into infinity, cares eased by the warm tones of chiming guitars, while Beth de Cent's smokey vocals come together in perfect harmony with Kennedy's.

'Andy' treats you to a yearning tale of forbidden love, packed with homoerotic overtones so full blooded they'd make Morrissey blush like a young Caligula, while the marbled melodies of 'Broken Light' come on in nostalgic ripples and waves of sepia-tinged beauty.

'Let You Down' finds Kennedy's voice sounding better than ever, detailing visceral regret over a full bodied groove which marries the baggy backbeat of his hometown with the sultry exoticism of Thai-funk.

Opening the B-side with a masterful subtlety, synth led instrumental 'Midnight Pt.2' sees Kennedy taking us for a moonlit stroll by the ocean before 'Dana' ushers in the dawn with the greatest X-Files inspired song ever written (sorry Cerys).

The antithesis of over-serious hipster cool, the earnestly emotional lyrics, anthemic chords and shimmering should be enough to prompt John Hughes to rise again and make a much needed sequel to The Breakfast Club.

'Disappear' finds Kennedy and drummer Matt Booth drinking in the cosmic vintage of Düsseldorf '72, as their chiming West Coast guitars are joined by celestial keys, head nodding bass grooves and a motorik rhythm.

'Clouds' draws us back into the haze as Kennedy's multi-tracked vocals gently melt into the swirl of flanged guitar, while 'Avoid The Light' closes the LP with a plea to stay in the dreamworld just a little longer.

Alive with lyrical depth, melodic intricacy and lush production, 'II' is the work of a confident and mature multi-instrumentalist and songwriter.

Ryan performs with the full band at The Social Bar on Saturday October 10th at the kind invitation of Slipstream alongside DJ’s from premier vinyl reissue label Be With.