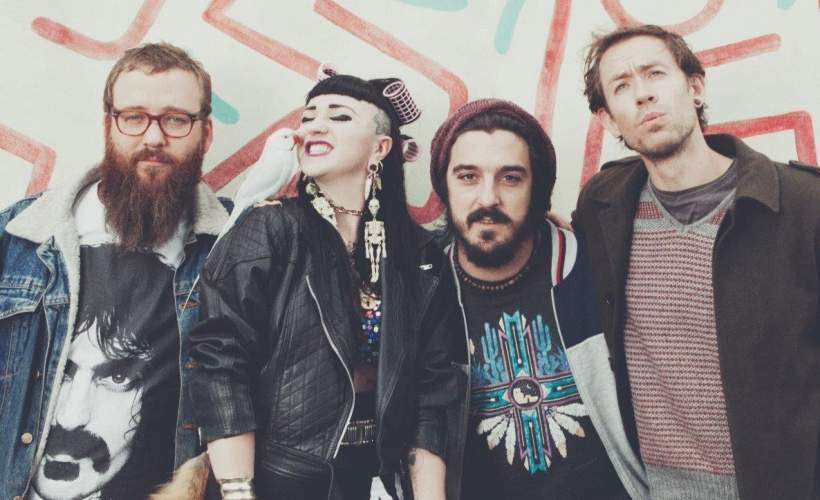 
See them play a special headline show at Albert Hall at Manchester on Wednesday 5th of October, 2022. Set a personal reminder with Gigantic.

“'Mood Valiant' is a joyous, frolicking ode to renewed life. It signals a strong return for Hiatus Kaiyote.” - CLASH

“Hiatus Kaiyote have crafted something brilliant with Mood Valiant - an album that’s effortlessly likable, commandingly confident, and rich with heart and soul.” - PopMatters

Get your Haitus Kaiyote tickets today from Gigantic to avoid missing out on the chance to have your ears thoroughly massaged and your mind blown by this genre-warping band.

Music critics have dubbed Hiatus Kaiyote ‘neo soul’ while the band themselves describe their strikingly original style as “Multi-dimensional, polyrhythmic gangster sh*t”. Whatever you call them, there’s no denying that the quartet from Melbourne are doing things a little differently.


Forming in 2011, Nai Palm, Paul Bender, Perrin Moss, and Simon Mavin have since been lauded by critics around the world for their bold new style, and can even count Prince amongst their growing army of global fans. The Guardian has described them as “[veering] from drowsy, soporific funk to more angular numbers with quirky time signatures and others that could be phantasmagoric new age with a touch of cool jazz.”

Don’t miss out on your chance to experience one of the hottest sounds from Down Under in a live setting, book your tickets to one of Hiatus Kaiyote’s concerts through Gigantic today.

It’s inspiring to think that a four-piece band from the mid-Northern Melbourne, Australia suburbs could explode around the globe with a genre defying cascade of soulful sounds that would inspire the likes of some of the most respected names in popular music and a rabid legion of fans worldwide.

Hiatus Kaiyote's story begins with a girl toting a novelty guitar. Bender, as everybody calls him, was hanging out at Gertrude's Brown Couch in Melbourne's groovy inner-suburb of Fitzroy when the striking Nai performed solo. "I didn't know what she was gonna do because she was there with this really whack pink guitar," Bender remembers drolly. "She started the set explaining that her guitar was locked in someone's house and she couldn't get it, so she had to borrow this one. It was like this child's pink shit little nylon guitar. She just started playing and singing and I was like, Whoa, what is this? This is crazy! I was instantly blown away by the voice and the complexity of the tunes. I'd never really heard that combination of elements before. Straight away I was like, Oh, man, I gotta do a band with this girl." He business-carded her post-gig but Nai, having no formal musical background, was initially unsure about collaborating, worried her songs were "a bit weird".

In fact, the fantastically named Hiatus Kaiyote came together over time, its members encountering one another fatefully in various bands, cafés, and share houses. Bender, who'd made it his "mission" to seek out complementary players, found that challenging. Says Nai, "I was ready to give up on the whole band idea, because the musicians were amazing - like, really gifted musicians - but it needed more than that. It needed emotional connection to the music - but with creativity." She retreated into her beloved desert… Hiatus Kaiyote eventually crystallized after the quiet Pez joined, along with his curious roomie Simon. "Once we were all in the same room playing, it was just like, This is what it's supposed to be like!," Nai enthuses. Hiatus Kaiyote jammed on their now Grammy-nominated song ‘Nakamarra’ - which Nai had just penned about a friend devoting herself to working outback with Indigenous Australians. "I still bring in songs," she says, "but we can come up with shit from scratch together - and that's way more rewarding. Usually the best stuff comes out when you're just kinda winging it." Indeed, Hiatus Kaiyote isn't merely a soul/funk/jazz collective - it's a boldly unconventional paradigm, with Nai a singer/songwriter, and Bender, Simon and Moss all instinctive musicians and bedroom producers.

Hiatus Kaiyote issued their acclaimed debut Tawk Tomahawk, of authentic homemade grooves, via Bandcamp - and shot a mesmerising bushland video for ‘Nakamarra’. Meanwhile, they started to attract influential industry fans starthing with Taylor McFerrin whom they supported at Melbourne's historic Esplanade Hotel ("The Espy"). Simon recalls, "We got off stage and he was just like, What the hell was that?" The Brooklyn jazz-hopper championed Hiatus Kaiyote in an interview by the blog From Paris, which later profiled the band. Taylor also shared their music with BBC tastemaker DJ Gilles Peterson (they'd later win "Best Breakthrough Act" at his Worldwide Awards) and Anthony Valadez at California's KCRW. The Roots' Questlove proclaimed their music "undeniable". "It really went gangbusters," Nai says. Even Prince tweeted about Hiatus Kaiyote.

Salaam Remi, the esteemed producer who's liaised with Amy Winehouse, Nas and The Fugees, determined that Hiatus Kaiyote be the flagship signing to his Sony imprint Flying Buddha. Hiatus Kaiyote repackaged Tawk Tomahawk with a new version of Nakamarra featuring a verse by Q-Tip, the legendary member of A Tribe Called Quest. They subsequently became the first Australian act to receive a Grammy nomination in an R&B category ("Best R&B Performance"). "Just to be propelled into that kind of platform and welcomed into that lineage is validation in itself," Nai muses. The band even got pulled aside on the red carpet at the awards by noneother than Pharrell Williams who stopped an interview with MTV so that he could approach the band and let them know how inspired he was by their music.


Today, Hiatus Kaiyote present Choose Your Weapon - imagining the future past, and juxtaposing the acoustic and electronic, over 18 tracks and a 70 minute musical adventure. Again self-produced, this sophomore album honors soul music's history while reveling in its experimentation and globalization of sound. This album, in many ways, was born on stage -- "Most bands generally write their album as they're making it, whereas we already had so much material that our fans were familiar with, so we owed it to them to actually document it," Nai states. Nevertheless, the band did freely explore in the studio, serendipity their muse. And the outfit fully utilized their accumulated vintage synthesizer. "The synth is a really interesting bridge between live instrumentation and production because it's electronic, but essentially it's still an instrument," Nai observes. Above all, Hiatus Kaiyote, tracing the missing links between Rotary Connection, J Dilla and Flying Lotus, chart their evolution on Choose Your Weapon. "With our first record, we'd been together six months or a year," Nai says. "So you put a couple of world tours under your belt and then you try to produce a record, it's a whole other thing."

Intense live, ‘Shaolin Monk Motherfunk’ is synth-funk boogie with a subversive prog-rock breakdown. ‘Borderline With My Atoms’ is quiet storm balladry evoking Minnie Riperton. Nai has depicted the serpentine ‘By Fire’ as "a burial song", the former fire-dancer, who lost her father in a house fire, reclaiming the element's life-giving over destructive force. Hiatus Kaiyote approached one of their idols, orchestrator/composor/multi-instumentalist Miguel Atwood-Ferguson to put his “one man orchestra” on ‘The Lung’. The album's poetic lead single ‘Breathing Underwater’, was conceived for Stevie Wonder, Nai reveals. "All of our icons kept hearing our music - and Stevie's my favorite one. So it was like, What if Stevie hears one [of the songs]? None of them are good enough! We need to write a new one especially for Stevie. That's why I have the key change turnaround - 'cause he's king of that." However, the lyrics tell of something else. "There's so many love songs, but I wanted to make one that was about really simple forms of love that aren't necessarily romantic - like the love of a cactus that can survive for over 100 years without water and then, when it rains, it blossoms in minutes," Nai suggests. "People always use metaphors to express their love, but the metaphor is its own love within itself - and it is its own universe… So it's like a love song to everything.

In 2016, “Breathing Underwater” gave Hiatus Kaiyote their second Grammy nomination (also as Best R&B Performance), and in the year that followed, they saw their work sampled by the likes of Anderson .Paak, Drake, Kendrick Lamar and Rapsody, further confirmation of the inspiration that their music has generated with their peers who have embraced them as one of their own.

After taking a much needed hiatus (pun intended) to recharge and refresh in 2017, the band is now in the process of recording their hotly anticipated third album, forging ahead to their own beat.