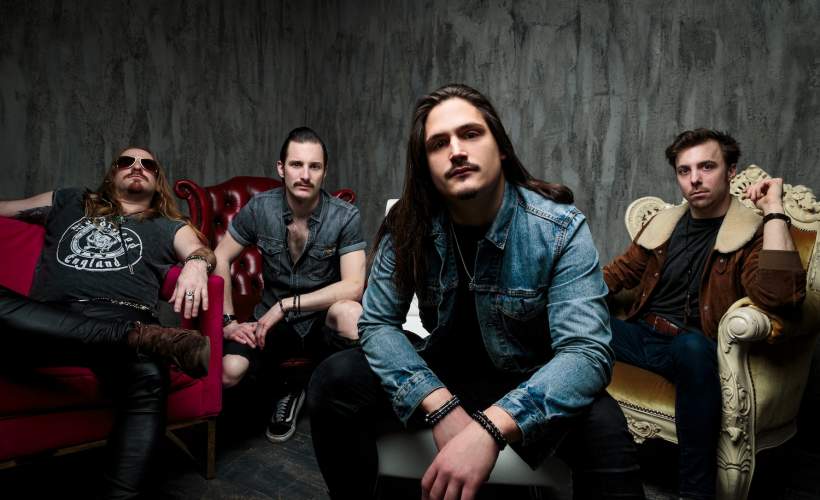 Tweet
Daxx & Roxane, are a kick-ass 4 piece rock ’n’ roll band originating from Switzerland, now based in London. With Led Zeppelin, Deep Purple and AC/DC as their key influences, it’s no wonder that Kerrang! Magazine has hailed them as “tooth-and-nail, testosterone-powered rock.”

Citing Led Zeppelin, Deep Purple and Mötley Crüe as key influences,
it’s no surprise that their philosophy is that “Rock ’n’ Roll is all about
energy. All about creating an adrenalin rush” - and that’s reflected in their intense live shows, as anyone who witnessed their storming homecoming gig at the Montreux Jazz Festival would certainly tell you.

The band was also handpicked as main support at HIM’s final UK show in December 2017 at the Camden Roundhouse, which speaks for itself.

Their commitment to writing songs with killer riffs that grab you and refuse to let go, and huge chorus hooks that mark them as instant classics, is reflected in their highly praised debut album, ‘Ticket to
Rock’. Their second studio album, rightfully self-titled 'Daxx & Roxane', showed the world they have what it takes to continue on the right tracks.

Released in the middle of the world's lockdown, it ended up on many shelves around the globe, from the UK to Japan, from Australia to the
USA.

In the past 3 years, they started collaborating with world-known people

from the industry. To mention just a few, they worked with Brit Award-winning producer Pedro Ferreira (The Darkness, Meatloaf, The

Stereophonics) and legendary Don Airey (Deep Purple) on the single'Interstellar', with the video being exclusively premiered on Planet Rock.
With songs that have collectively spent over 50 weeks on the Planet
Rock playlist and a host of 9 and 10 out of 10 album reviews, singles being played all over the world on more than 80 radio stations, both albums have proven being worth a listen.

Hard Rock Hell Mag might just be right in suggesting that, “Daxx & Roxane are on the fast track to Superstardom”.