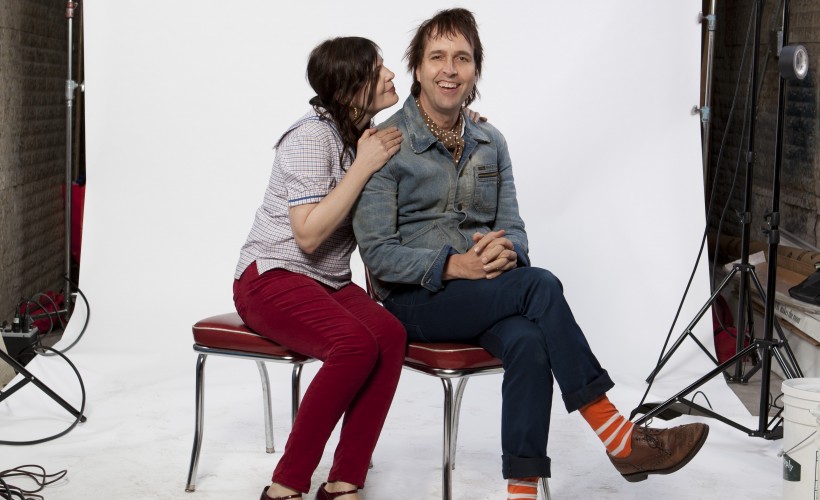 Chuck Prophet returns to Europe Feb 2017 with the Mission Express in support of his thirteenth album, "Bobby Fuller Died For Your Sins" which is scheduled for release early next year on Yep Roc. Every year Chuck’s ups the quality stakes on his albums from the amazing ‘Let Freedom Ring’, to ‘Temple Beautiful’ and his last album ‘Night Surfer’ they have all seen Chuck at the top of his game. Where Chuck excels the most is in the live setting with his two hour powerhouse shows pulling tracks from his massive back catalogue and stretching them out with epic guitar solos on tracks like ‘You Did’ or ‘Castro Halloween’. Since emerging onto the music scene at age 18 as a member of the seminal rock band Green on Red, Prophet has collaborated with everyone from Warren Zevon, Kelly Eillis, Jim Dickinson, Alejandro Escovedo and Lucinda Williams. Prophet’s music has been featured in films as well as the hit tv shows “True Blood”, “Californication” and “Sons of Anarchy” and most recently been covered by the likes of Bruce Springsteen.

Chuck Prophet & the Mission Express return to Europe in support of his new album 'Night Surfer' (his 12th!) which was recorded in Prophet’s hometown of San Francisco at Decibelle Recording Studio and in Nashville at Alex the Great with noted producer Brad Jones and was mixed in upstate New York by Paul Q Kolderie. Of the album, Prophet comments, “This record is loosely conceptual but universal all the same. It’s all about a path forward, about looking around and imagining where we’ll be in 20 years if we just follow that path. And of course, you’ll find a persistent anxiety throughout; we live, after all, in anxious times. As John Murry told me after a first listen, ‘It brings a tear to the eye and blood to the johnson.’” So yeah, a new record, new sound. It’s got it’s own groove with in your face guitars that snake and harmonize. They jangle too, thanks in no small part to special guest Peter Buck.”

Since emerging onto the music scene at age 18 as a member of the seminal rock band Green on Red, Prophet has collaborated with everyone from Warren Zevon and Kelly Willis to Jim Dickinson and Lucinda Williams among many others. In recent years, Prophet’s music has been featured in several hit television series including HBO’s “True Blood,” Showtime’s “Californication,” and FX’s “Sons of Anarchy.” He also co-wrote all the songs on Alejandro Escovedo’s 2008 critically acclaimed album Real Animal. Chuck's live shows are second to none with some of the best guitar playing and tunes you will hear.

Once again Chuck and the band gave a brilliant performance that was really entertaining and brilliant music. They engaged well with the audience, made us feel a vital part of the whole experience and put a smile on everyone's face.

The music was brilliant in every respect and I would definitely go and see Chuck Prophet again either at Club Bach or elsewhere so long as it's not too far from our home in the South West. I am not good at standing for long periods but found a table to perch on at the side of the venue, which was fine. It is not a brilliantly accessible venue but if you're resourceful it can be managed.

That's all we have for Chuck Prophet! Check out their upcoming shows