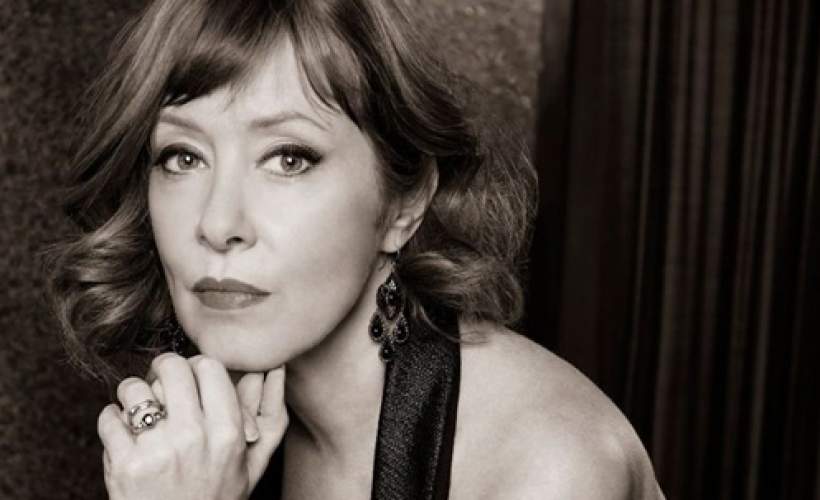 Tweet
Suzanne Vega celebrates the release of An Evening of New York Songs and Stories (Cooking Vinyl) with a run of European and UK dates including this special performance at the Barbican in London.

In anticipation of the tour, Vega exclaimed, 'I am excited to share these songs about my hometown, the city I love, joined by the band with which I recorded An Evening of New York Songs and Stories.'

On An Evening of New York Songs and Stories, Vega revisits some of her most New York-centric repertoire in a stunning live recording on which she is backed by longtime guitarist, Gerry Leonard, bassist Jeff Allen and keyboardist Jamie Edwards. Recorded at New York City’s famed Café Carlyle in early 2019, the album includes both familiar songs like ‘Luka’ and ‘Tom’s Diner’ and deep cuts from her catalogue like ‘Frank and Ava’ and ‘Ludlow Street’. The mix of repertoire also features ‘New York Is My Destination’ from Lover, Beloved: Songs from an Evening with Carson McCullers, Vega’s one woman play about the Southern gothic novelist Carson McCullers, and a cover of her late friend Lou Reed’s ‘Walk on the Wild Side’.

Widely regarded as one of the foremost songwriters of her generation, Suzanne Vega emerged as a leading figure of the folk-music revival of the early 1980s. Since the release of her self-titled, critically acclaimed 1985 debut album, she has written and recorded numerous songs that have become part of the contemporary music vernacular, including ‘Luka’, certainly the only hit song ever written from the perspective of an abused boy, ‘Marlene on the Wall’, a surprise hit in the UK and ‘Tom’s Diner’, a strange little a cappella piece that was remixed by U.K. electronic dance duo ‘DNA’ and became a major club hit. Her albums, including her self-titled debut, the follow up, Solitude Standing and 99.9F have sold millions of copies.

Bearing the stamp of a masterful storyteller who 'observes the world with a clinically poetic eye,' Suzanne’s songs have always tended to focus on city life, ordinary people and real world subjects. Notably succinct and understated, Suzanne Vega’s work is immediately recognizable, as utterly distinct and thoughtful as it was when her voice was first heard on the radio over 30 years ago.

Widely regarded as one of the foremost songwriters of her generation, Suzanne Vega’s latest offering, An Evening of New York Songs and Stories, will be released on September 11, 2020 (Amanuensis/Cooking Vinyl). “I recorded these songs at the Café Carlyle in New York City,” Vega says of the album. “It’s a small, exclusive club that has hosted legends from Eartha Kitt to Judy Collins, and is also known to be the place where Jackie Kennedy met Audrey Hepburn. I love it for its bohemian old-world glamour! I included songs that were inspired by New York City or for which New York provided the backdrop, including “Walk on the Wild Side” by my late, great friend, Lou Reed - a song I rarely heard him sing himself.”

An Evening of New York Songs and Stories finds Vega backed by longtime guitarist and musical director Gerry Leonard, bassist Jeff Allen and keyboardist Jamie Edwards. Produced by Leonard, mixed by Grammy Award-winning engineer Kevin Killen and mastered by Grammy Award winner Bob Ludwig, the album was recorded in early 2019 and includes familiar songs like “Luka” and “Tom’s Diner” and deep cuts from Vega’s catalog including “Frank and Ava” and “Ludlow Street.” The mix of repertoire also features “New York Is My Destination” from Lover, Beloved: Songs from an Evening with Carson McCullers, Vega’s 2016 album from her one-woman play about the Southern gothic novelist Carson McCullers.

Vega emerged as a leading figure of the folk-music revival of the early 1980s when, accompanying herself on acoustic guitar, she sang what has been called contemporary folk or neo-folk songs of her own creation in Greenwich Village clubs. Since the release of her self-titled, critically acclaimed 1985 debut album, she has given sold-out concerts in many of the world’s best-known venues. Known for performances that convey deep emotion, Vega’s distinctive, “clear, unwavering voice” (Rolling Stone) has been described as “a cool, dry sandpaper-brushed near-whisper” by The Washington Post, with NPR Music noting that she “has been making vital, inventive music” throughout the course of her decades-long career.

Bearing the stamp of a masterful storyteller who “observes the world with a clinically poetic eye” (The New York Times), Vega’s songs have tended to focus on city life, ordinary people and real-world subjects. Notably succinct and understated, her work is immediately recognizable�"as utterly distinct and thoughtful as it was when her voice was first heard on the radio over 30 years ago.

Vega was born in Santa Monica, CA, but grew up in Spanish Harlem and the Upper West Side of New York City. She was influenced by her mother, a computer systems analyst and her stepfather, the Puerto Rican writer Egardo Vega Yunque. There was a heady mix of multicultural music playing at home: Motown, bossa nova, jazz and folk. At age 11 she picked up a guitar and as a teenager she started to write songs.

Having studied dance at the High School for the Performing Arts, Vega later attended Barnard College where she majored in English Literature and minored in theater. In 1979, after attending a concert by Lou Reed, she began to find her true artistic voice and distinctive vision for contemporary folk. A receptionist by day, she would hang out at the Greenwich Village Songwriter’s Exchange by night. Soon she was playing iconic venues like The Bottom Line and Folk City - the word was out and audiences were catching on.

At first, record companies saw little prospect of commercial success. Vega’s demo tape was rejected by every major record company - and twice by the very label that eventually signed her. Her self-titled debut album (A&M) was finally released in 1985, co-produced by Steve Addabbo and Lenny Kaye, guitarist for Patti Smith. One million records later, it was clear that Vega’s voice was resonating around the world. “Marlene on the Wall” was a surprise hit in the U.K. and Rolling Stone eventually included the record in their “100 Greatest Recordings of the 1980s.”

1987’s follow-up, Solitude Standing - again co-produced by Addabbo and Kaye - elevated her to star status. The album hit #2 in the U.K. and #11 in the States, was nominated for three Grammys (including Record of the Year) and went platinum in the U.S., selling three million copies worldwide. “Luka” is a song that has entered the cultural vernacular - likely the only hit song ever written from the perspective of an abused boy. Vega continues to support children’s and human rights groups such as Amnesty International, Casa Alianza and Covenant House.

The opening song on Solitude Standing was an a cappella piece, “Tom’s Diner,” about a nondescript restaurant near Columbia University. Without Vega’s permission, it was remixed by U.K. electronic dance duo DNA and bootlegged as “Oh Susanne.” Suddenly Vega’s voice was showing up in the most unlikely setting of all: the club. She permitted an official release of the remix of “Tom’s Diner” under its original title, which reached #5 on the Billboard pop chart and went gold. In 1991, she brought the remix and other unsolicited versions of the song together in a compilation called Tom’s Album. Vega also holds the distinction of being christened “Mother of the MP3” by the technology’s creator, who used her recording of “Tom’s Diner” to refine its compression algorithm.

Vega co-produced her follow-up album with Anton Sanko, 1990’s Days of Open Hand. The album featured a string arrangement by composer Philip Glass, for whose song cycle Songs from Liquid Days she had penned lyrics years earlier. Continuing to battle preconceptions, she teamed with producer Mitchell Froom for 1992’s 99.9F, the sound of which instigated descriptions such as “industrial folk” and “techno folk.” Certified gold, 99.9F won a New York Music Award as Best Rock Album. Vega was also the first of an elite group of women, joined recently by Billie Eilish, to land three consecutive singles in Billboard’s Alternative Top 10, beginning with “Book of Dreams,” followed by her featured spot on DNA’s “Tom’s Diner” and concluding with her own “Blood Makes Noise.”

In 1996, Vega returned with the similarly audacious Nine Objects Of Desire, also produced by Froom, who by then was her husband. Over the years, she has been heard on soundtracks including Pretty In Pink (“Left Of Center” with Joe Jackson) and contributed to such diverse projects as the Disney compilation Stay Awake, the Grateful Dead tribute Deadicated and the Leonard Cohen tribute Tower Of Song. In 1999 The Passionate Eye: The Collected Writings Of Suzanne Vega, a volume of poems, lyrics, essays and journalistic pieces, was published by Spike/Avon Books. In 2001, she returned to her acoustic roots for her first new album in five years, the critically lauded Songs In Red And Gray.

In 2007, Vega released the Grammy award-winning Beauty & Crime on Blue Note Records, a deeply personal reflection of her native New York City in the wake of the loss of her brother Tim Vega and the tragedy of 9/11. Vega’s love for the city shines through as both its subject and its setting, and she mixes the past and present, the public with the private, and familiar sounds with the utterly new - just like the city itself.

Recently Vega was a member of the cast of the Off-Broadway production of Bob & Carol & Ted & Alice. The New York Times said of her performance, “As our polymorphic host, the brandy-voiced Vega…is a delightful, smoothly sardonic presence…a discreetly entertaining font of omniscience.”