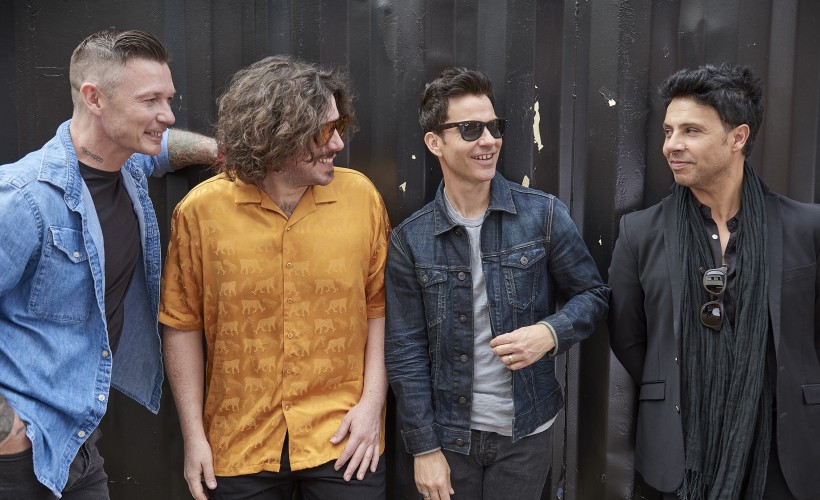 Stereophonics were amazing. Really pleased we went but the evening was totally ruined by lack of toilets! There were no toilets anywhere to be seen from middle to the back of the park. People were weeing anywhere & everywhere. We didn’t drink because if this. Cannot believe how poorly organised this was for 35,000 people. Sad as Stereophonics were just amazing!!!

Toliet chaos security to stop arguments people jumping queues. This was the excuse for people to pee in cups and no go to toilets only one urinal only area.

"Brilliant gig, toilets and bar queue beyond though"

Thoroughly enjoyed the Stereophonics, but missed the first few songs as toilet and bar queues were an absolute shambles, the 40 minutes between Tom Grennan finishing and the Stereophonics coming on wasn’t enough time!!
100 toilets there for 35000 and that is the appropriate amount. I’d like to know who made that decision
The location of the bars could have been better placed so you could at least see the stage while you were in the queue. Lovely surroundings and fab band but unlikely to see another band here. When you pay that amount of money to see a band, provide a decent amount of toilets, instead of money grabbing, pay out for extra facilities so people want to come back, was shocking the amount of men (and women) urinating everywhere.
If you had paid out for more toilets, people would have spent more in the bar, so would have been a win - win. People didn’t drink as they didn’t want to queue for the loos.

12th time seeing the Stereophonics and they were amazing as always.

Yet again I witnessed another outstanding performance from the Stereophonics, I always come away wanting to go see them again, thank you for coming to Swansea.

Tweet
Stereophonics have today announced a run of very special intimate UK dates for November and December 2021 to celebrate the 20th anniversary of their multi-platinum acclaimed album ‘Just Enough Education to Perform’. Stereophonics will be performing J.E.E.P. in its entirety plus brand new music and more. Tickets on sale Friday 29th October at 9am with Gigantic.

Released in 2001, J.E.E.P. was the third studio album released by Stereophonics and spawned three top-ten singles in the form of ‘Mr Writer’, ‘Have a Nice Day’ and ‘Handbags and Gladrags’. Since its release in 2001, J.E.E.P. spent five weeks at number one, achieved six times platinum status in the UK and cemented Kelly Jones’ place as one of the great timeless British songwriters.

As they celebrate 25 years as one of the UK’s most enduring and loved bands, next year Stereophonics will also release new album ‘Oochya!’ on 4th March 2022 available to pre-order here. Stereophonics recently released the first single ‘Hanging On Your Hinges’ from forthcoming album, ‘Oochya!’ link Here.

Stereophonics is a Welsh rock band, formed in 1992 in Cwmaman, Wales, United Kingdom, by friends Kelly Jones (guitar/vocals), Stuart Cable (drums; died 2010) and Richard Jones (bass). Colloquially known to their fans as the 'Phonics or the Stereos, in the years preceding their popularity, they went through shifting line-ups and were known by a variety of names including "KDR", "Zephyr", "Silent Runner", "Blind Faith" and their most widely known pre-Phonics moniker "Tragic Love Company," taking one word from each member's favourite band (The Tragically Hip, Mother Love Bone, and Bad Company). The band's official current line-up is Kelly Jones, Richard Jones, Javier Weyler and Adam Zindani.

'Word Gets Around' was released on the 25th of August, 1997, with equal credit being given to all three members of the band for writing the songs Jones/Jones/Cable) with credit for the words given to Kelly Jones. It was preceded by singles Local Boy in the Photograph (#51), More Life in a Tramps Vest (#33) and A Thousand Trees (#22) and it charted well at #6 in the UK album charts. Following the success of the album, Traffic (#20) was released in October 1997 and the band capped off an exceptional year by winning the 1998 BRIT award for 'British Breakthrough Act'. They also re-released Local Boy in the Photograph and it gained a more respectable chart positioning at #14 and played to their biggest crowd in their career to that point by receiving a heroes welcome at their homecoming gig in Cardiff Castle on June 12th, where they played to a 10,000 strong crowd during a 19-song set which included 5 new songs. By this stage, the live setup of the band had grown to include Tony Kirkham as the touring pianist and keyboard player.

The song Local Boy In the Photograph has since become a cult classic and was given a Q Classic Song Award at the Q Awards in 2007. A video was also shot for the song Not Up to You but the track remained unreleased by V2.

In November 1998, the band moved quickly to start the wheels turning on the release of their second album, 'Performance and Cocktails', releasing the song The Bartender and the Thief to wide commercial success. Despite it's heavier, archaic sound it charted at #3 - the band's highest charting up until that point - which would remain the highest ranked single chart position for 7 years along with other songs they would subsequently release. In February, just prior to the album release, another single Just Looking (#4) was released, again to massive commercial and critial acclaim and on March 8th, 1999 V2 released Performance and Cocktails. The songs were variously recorded at Real World Studios in Bath, Parkgate in Sussex and Rockfield in Monmouth, and the album was a major success, hitting the UK album chart #1 instantly. It's success was only heightened by the following successful single Pick a Part That's New (#4) with it's promotional video which included the band sending up the film 'The Italian Job'.

Buoyed by their first #1 album and recent chart success, the band announced they would be playing their biggest ever show at the soon to be demolished Morfa Stadium, Swansea. On July 31, 1999, the band took to the stage in front of 50,000 adoring people. The show, which was one of the largest ever outdoor gatherings to take place in Wales at the time, and was a triumphant success. Two weeks after playing to their mammoth audience in Swansea, the band took home the Kerrang! award for 'Best British Band' and 'Best Album' for 'Performance and Cocktails'. On the back of the Morfa Stadium show, they released two more singles. I Wouldn't Believe Your Radio and Hurry Up and Wait, both songs which were a departure for the normally consistent, rockier sound that had come to be expected, but still charted well, both hitting the #11 spot.

Once again teaming up with Bird and Bush to produce their album, the Stereophonics set about recording an album that was a sonic departure for what they had previously amassed as a band. In the years that had taken them away from small town Cwmaman and around the world as the new darlings of the Britpop machine, they had come to experience a lot more of the good and bad sides the music industry had to offer. Preceded by the track Mr. Writer, it was a downbeat, acoustic drawl that saw their comeback on the UK chart scene. It charted well at #5, and had an infectious melancholy hook, but the song was a direct response to a journalist that had toured with the band on an American tour. The band claim that he had "lived amongst them, ate their food and drank their drink" (citation needed) but when he left the band to write about them, the review was very negative. This lead to a steely attitude being taken by the band after this. However, this had a knock on effect to the band in general, as the media regarded Jones with a growing discomfort and unease that neither he, or the band have ever really been able to shake.
The second single, the polar opposite of Mr. Writer, was Have a Nice Day (also UK#5), a poppy, joyful song about taking a taxi ride in California. The subjects of Jones' writings have for a long time been put under the microscope, but consistently, you can get a feel for the experience he was having at the time by taking the lyrics as read. Have a Nice Day itself is a clear dividing point for many Stereophonics fan. The success of this song and the album that followed gained the band a wealth of new fans, but older fans felt that the band were moving too far into a new, pop-orientated direction. The album, the appropriately titled 'Just Enough Education to Perform' went straight in at #1 in the UK. The band had originally wanted to name the album 'JEEP', a shortened word which stood for the phrase that apparently Kelly got from his brother after he came home from a stint in the army and wrote the word on his bedroom wall. However, Daimler-Chrysler copyrighted the word this name so it was changed to its current, elongated title. It is commonly referred to by it's acronym, 'J.E.E.P.', with the album itself seeing a departure from the normal 3-piece rock sound, and straying more into dreamy acoustic and indie rock territory.
The album spawned three further other singles, one of which was the country-tinged Step On My Old Size Nines (UK#4). On July 21st, the Stereophonics followed in the footsteps of the Manic Street Preachers and played a full concert at the newly built Millennium Stadium, Cardiff. Then in November 2001, the band announced it would release Handbags and Gladrags (UK#4) as an official studio track, though it wasn't on the current album tracklisting. 'Just Enough Education to Perform' got a re-release with the song included, and also a hidden bonus track called Surprise, which was originally a b-side on the Have a Nice Day single.


Next year sees the release of their highly anticipated new album Oochya! - which also follows the 20th anniversary of J.E.E.P. which they celebrate with a huge tour.

Get your Stereophonics tickets with Gigantic!

STEREOPHONICS release a new mix of ‘Hungover For You’

Get tickets for Stereophonics with Gigantic!

Gigantic has your tickets for Stereophonics

Gigantic has tickets for Stereophonics