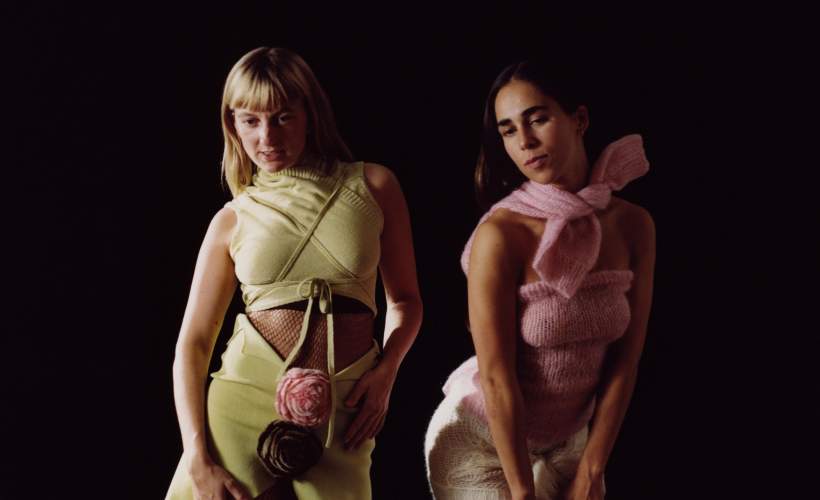 Smerz’s upcoming full-length debut, Believer, begins with cascading chimes that almost sound as if they were plucked straight from a fairy tale. A slow and steady riff from a bass guitar then rings out, sounding as much like an acoustic instrument as it does a computer program attempting to mimic a guitar’s organic resonance. Even in the first few seconds Believer, Henriette Motzfeldt and Catharina Stoltenberg bring the innovative spirit of their adopted Copenhagen to bear on their past, one that’s marked by adolescent choir practices and dance rehearsals in their native Oslo, winter vacations spent in small cabins nestled in the vast, untouched landscapes of the Norwegian countryside, and an innate belief in collective responsibility.

Believer melds sonic touchstones from their youth, like musicals and classical music, with swirling, trance-indebted synth lines and hip-hop plus R&B vocals. Lyrically, it paints their personal conversations onto a much broader canvas. Motzfeldt and Stoltenberg cast the raw matter of their friendship-the contrast between your own self-image and how others perceive you, the difficulty of communicating with someone you were once intimate with, and the never-ending struggle between having faith in your own voice and self-doubt-in relief with a sense of collective responsibility to reckon with these limiting perceptions. Believer’s audio-visual world is a deeply personal embrace of Norway in many respects, but its implications run deeper�"it’s rare to be able to construct a dream world like the one Motzfeldt and Stoltenberg have without the weight of practical concerns breaking down your ambition, will, and sense of self. Motzfeldt and Stoltenberg carve out a space where it’s not so impossible for these dreams, both big and small, to grow in the midst of the systemic societal weeds that tangle up people’s self-worth and confidence.

Smerz bring Believer to life with the help of Benjamin Barron and Bror August, who respectively directed and styled the series of interconnected visuals that will accompany the album. They’ll render opulent Norwegian folk traditions, like the communal hallingdansen that centers on polyrhythms, and the lush landscapes of the Norwegian countryside in the painterly style of filmmaker Peter Greenaway’s mise-en-scènes while drawing on the minimalist staging of Lars von Trier’s Dogville, where your imagination fills in an entire set of visual associations around just the outline of a gooseberry bush on stage. “Each scene is a picture in a way, but it’s alive and hopefully there’s this glimpse into a world and a bigger narrative,” Stoltenberg says. It’s a world that tows the line between reality and dreams, and one that’s steeped in the nostalgia and romanticism of Norway’s cultural and artistic history.

The world that Smerz build out with Believer isn’t necessarily a straight interpretation of their shared cultural heritage or their past. By using the intimate conversations of their friendship as foundational material, Motzfeldt and Stoltenberg nimbly dance around cultural expectations, whether it be in Norway or more broadly. It’s a disposition that almost mirrors the way that they produced the album�"they actively worked to integrate classical music’s freer sense of timing into their computer-based process, trying to create something within the standard grids of music softwares that felt less rigid and more alive. In Norway, as in many other places, there’s the feminist ideal of a strong, independent woman, one who can stand up for herself and make her own choices. “We should never demand from each and every one of us to be confident, strong, and free; we need to work for structures, whether it’s inside our friend group or in the political system, where it is easier to be yourself and think freely regarding your own dreams, body, love life, future and so on. This distinction between structural and individual responsibility is crucial when talking about feminism and the classical idea of an independent woman anno 2020,” Stoltenberg says.

Though their new work feels like the inner dialogue of an intimate friendship set against a panoramic view of the Norwegian countryside, the sounds of Motzfeldt and Stoltenberg earlier EPs, Okey and Have fun�"shuffling, laidback basslines, footwork-indebted rhythms, and clipped snippets of field recordings�"are more rooted in the Copenhagen techno scene they first fell into when they moved to the Danish city in 2011. Since then, Motzfeldt has been studying music composition at the Rhythmic Music Conservatory in Copenhagen and Stoltenberg has been enrolled in a masters mathematics program�"they’re both close to finishing their respective degrees�"and the two academic pursuits each bring something different to their creative processes. Motzfeldt’s academic compositions combine different genre prototypes to create something new, a process that fluidly complements the way the duo work together as Smerz. For Stoltenberg, coming up with mathematical proofs has made her more comfortable with searching for the unknown, which is something that she can apply to almost every aspect of her life. In spite of their intellectual pursuits, Motzfeldt and Stoltenberg’s collaboration sidesteps analytical processes in favor of spontaneity, randomness, and intuition.

Believer is as much a reflection of both Stoltenberg and Motzfeldt’s instinctual artistic partnership as it is their expanding orbit within the Copenhagen music scene. It’s a small universe that spans a wide spectrum of genres and methodologies, where the pointillistic work of composer Astrid Sonne exists in close range with the R&B of Erika de Casier. Smerz has fully embraced a similarly expansive palette over the past few years with their monthly NTS show. This residency is a environment where the duo can explore their patchwork musical influences: one episode was devoted entirely to Franz Schubert’s Die schöne Müllerin D. 795, a seminal song cycle based on the poems of Wilhelm Müller, and another brought together James Ferraro, RP Boo, and Nídia before ending with “Turkle Dove,” a spiritual performed by Bessie Jones and the Georgia Sea Island Singers from Alan Lomax’s archive of American traditional folk music. “We have enjoyed working with composition in this bigger sense, combining very different music and trying to find the fun meeting place between those different styles,” Motzfeldt says, which led to a greater sense of musical freedom. “The show was this playground that developed some kind of aesthetic. Some kind of expression started to suddenly arise,” Stoltenbeg says.

With Believer, which Motzfeldt and Stoltenberg starting working on three years ago, they formalize the boundless sonic world that started to emerge within each NTS show: these new songs seamlessly weave together techniques and sounds pulled from chamber and classical music, hip hop, R&B, and trance, but the end product is something altogether uncanny. Working mostly on their computer, their main instrument, Motzfeldt and Stoltenberg search for something new in well-known tropes, playing with the tension between the computer’s ability to render a spectrum of sounds ranging from the organic to the wholly unnatural. “There’s this hierarchy between different styles and what is expected of different genres, but we wanted to keep them all together in this flat hierarchy to show their different potentials and abilities,” Motzfeldt says. They transplanted a classical musician’s approach to the MIDI keyboard, leaning into the plastic-sounding effects that a computer imposes on string and harp samples. “You won’t end up in the same place as a symphony, where everything sounds alive, but you’ll end up in this new place in between,” Stoltenberg says.

On “The Favourite,” Motzfeldt’s vocals reach an opera singer’s range (a testament to her years of singing in choir when she was younger) while Stoltenberg plays some grand and stately strings on the computer. On “Rain,” they asked two violinists and a cellist to improvise on top of the string samples they already had on the track, a technique that reappears throughout the album. Midway through “Glassbord,” banging trap drums give way to an outright classical breakdown, where the sound of a violin dramatically ascends as a double bass moans softly below. “We opened up both the inputs and the process,” Stoltenberg says of Smerz’s widened palette of inspirations and sounds. “I feel like our shoulders relaxed a bit. The wish for the end was for the music to be more open,” she continues. “The big dream of what the music should be able to do is to give people this feeling of being disconnected to where you are in time and space. And maybe feel something. It won’t happen all of the time of course, but maybe someone will experience it.”