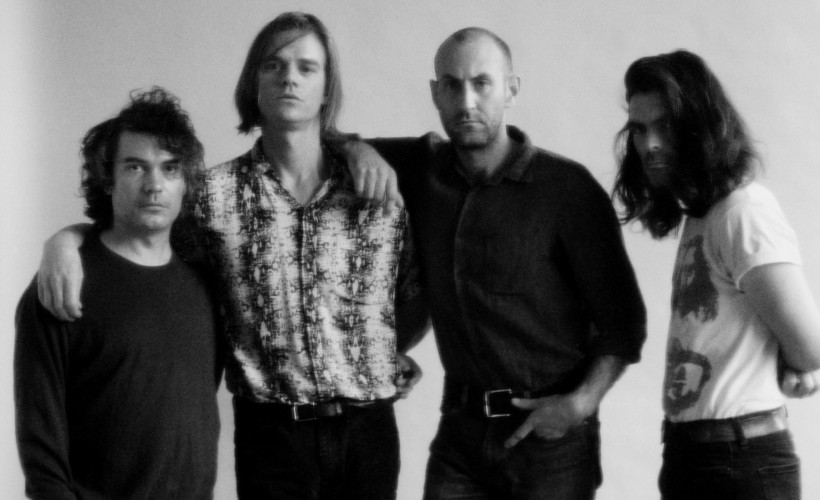 The band (formerly known as Viet Cong) have always produced songs that worked through themes of creation, destruction, and futility, and they’ve always done it with singular post-punk grit. The textures are evocative and razor-sharp. The wire is always a live one. But while that darker side may have been well-explored, that’s not quite the same as it being fully, intensely lived. This time it was, and the result is New Material, a collection that broadens and deepens Preoccupations to a true mastery of their sound. In it lies the difference between witnessing a car crash and crashing your own, between jumping into an ocean and starting to swallow the water.

“It’s an ode to depression," singer Matt Flegel says plainly. “To depression and self-sabotage, and looking inward at yourself with extreme hatred.” Typically resilient, the months leading up to recording New Material brought a new order of magnitude to feelings that had been creeping up on Flegel for some time. He’d written bits and pieces of lyrics through the course of it, small snippets he hadn’t assigned to any one thought or feeling but were emblematic of a deeper issue, something germinating that was dense and numb and fully unshakeable. As the band began writing music, that process gave shape to the sheer tonnage of what he’d been carrying. With virtually nothing written or demoed before the band sat down together, the process was more collaborative than before. It was almost architectural, building some things up, tearing others down to the beams, sitting down and writing songs not knowing what they were about. But for Flegel, it led to a reckoning. “Finishing ‘Espionage’ was when I realized,” says Flegel. “I looked at the rest of the lyrics and realized the magnitude of what was wrong.”

New Material builds a world for that feeling, playing through its layers and complexities while hiding almost nothing. That inscrutable side is part of the magic, here, and a necessary counterweight to the straight-jab clarity of Flegel’s lyrics. You can deep-dive the lyrics or zone into a riff; you can face it or you can get lost in it. “My ultimate goal would be to make a record where nobody knows what instrument is playing ever,” says multi-instrumentalist Scott Munro, “and I think we’ve come closer than ever, here. It shouldn’t sound robotic - it should sound human, like people playing instruments. It’s just maybe no one knows what they are.”

If the through-line unifying Preoccupations’ work is a furious, almost punishing cyclical quality, ‘New Material’ does offer some relief. “This is somehow the most uptempo thing we’ve ever done,” observes Flegel. That propulsive, itchy quality rescues ‘New Material’ from the proverbial bottom of the pit. To write these songs is to force oneself to reignite, to play them is to stand up and reengage. Closer “Compliance” may not seem revelatory on first listen, but it is deeply elemental, a crucial finale and the band’s first standalone instrumental. Original versions were built to death, reexamined and re-destroyed until they landed on just two chords - something simple, fundamental - and resolved to make meaning out of that, to show instead of tell. Flegel acknowledges it is more affecting to him than any other song on the record. It’s not redemption, more like a forced reprieve.


Where Can I see Preoccupations play live?

As the word spreads, the demand for Preoccupations tickets grows so we really urge you to make sure you book yours early to avoid disappointment!


Where can I get Preoccupations tickets?

Canadian post punks Preoccupations are one of the most exciting and original bands to emerge for a generation and Gigantic is excited to be able to offer you tickets!

Placing an order is made easy with Gigantic as you can access our easy-to-use site 24/7 with a computer, tablet or smartphone whilst busy on the go or from the comfort of your own home.

In a busy world it is easy to miss out, so it makes sense to place a personal reminder with Gigantic. Once placed, we will alert you with a text message or an email just prior to their release at 09:00 on Friday 9th of September.

Everyone is excited, and we at Gigantic expect our limited supplies of Preoccupations concert tickets to sell very quickly - so make sure you book yours before they all go!

Gigantic is famed for its excellent customer service which led to the Nottingham Post bestowing their illustrious ‘Retail Business of the Year’ award. So, choose from our wide range of essential gig tickets and know we are the best place to come whenever you are planning your big night out!

That's all we have for Preoccupations! Check out their upcoming shows