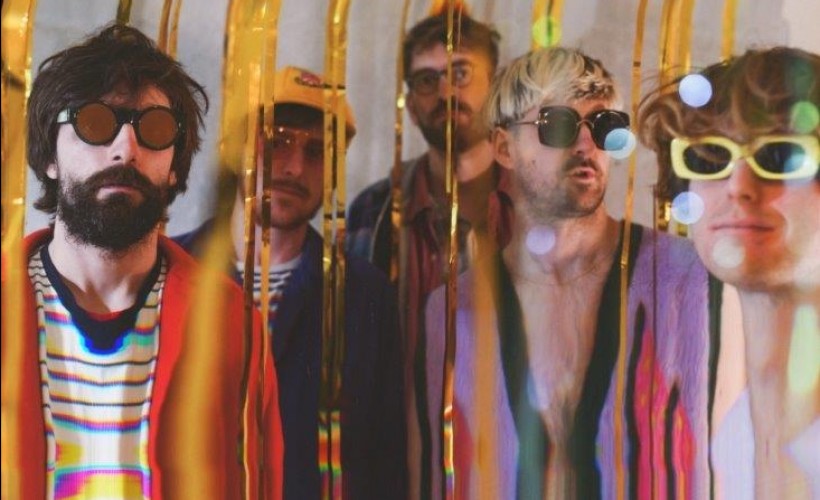 Plastic Mermaids are a five-piece band from the Isle of Wight who, after building their own analogue studio, have self-produced one of the most genuinely original and sonically adventurous debut albums you’ll hear all year.

They are brothers Jamie and Douglas Richards, who collaborate on vocals, synths and samples, along with guitarist Chris Newnham, bassist Tom Farren and drummer Chris Jones.

Born out of the ashes of previous bands Magic Octagon and Neon Fetus, Plastic Mermaids are not a band who have ever wanted for ambition.
The band released debut EP ‘Dromtorp’ in March 2014 to widespread critical acclaim, following up with the ‘Inhale The Universe’ EP in March 2015 and third EP ‘Everything Is Yellow and Yellow Is My Least Favourite Colour’ in June 2016. Later that same year, in November, they holed up in their barn-turned-studio to start work on their first full LP, which is due for release in 2019.

Where can I see Plastic Mermaids play?

The demand is growing so make sure you book your Plastic Mermaids tickets before they all go. Gigantic makes booking your favourite gig tickets easy as you can place your order 24/7 using your tablet, smartphone or computer from the comfort of your home or while busy on the go.

Does Gigantic have Plastic Mermaids tickets?

We only have limited supplies of Plastic Mermaids concert tickets available so you will need to book yours before they are all gone. With ten years of experience giving excellent customer service, you can be sure of making a stress-free booking on your essential gig tickets with Gigantic.

They’re surfers, they build their own effects pedals and they once sketched out the designs for a synthesiser played entirely by pigeons - but on their second full-length album, the endlessly inventive Isle Of Wight five-piece Plastic Mermaids are facing their dark side. This is their concept album, if you will, with their most raw and heartfelt lyrics to date filtered through the constantly shifting kaleidoscope of their music. It is the sonic adventure you’ve come to expect from an uncategorisable band but with a new emotional heft - a tale of hitting rock bottom and coming up again.
At the heart of Plastic Mermaids is the creative force of two brothers, Douglas and Jamie Richards, sons of a Gurnard boat-builder, who approach life like an art project, putting as much love into their band’s visual concepts and staging as they have into their unique brand of psych-rock and electronica. For Jamie, a tech genius who insists on making a piece of equipment for every sound he imagines in his head, the last two years have been busy with building and marketing his Neon Egg effects pedal - a machine that makes lush, swirling reverbs. It’s been used by Bon Iver, Arcade Fire, War Paint, Kurt Vile, Granddaddy, Olafur Arnalds, Wilco, Chvrches, Bicep, Patrick Watsons, Hot Chip and Glass Animals - he even gave an early model to Flaming Lips’ Wayne Coyne.
Plastic Mermaids’ music - neo-psychedelia, chamber pop, big-scale sound-scapes and innovative electronica - has often attracted comparisons to the Lips, but it owes just as much to their own personal melting pot of influences: Zappa, Pink Floyd, Bowie, Fleetwood Mac and classical. “We were always worried about how we’d get on to Spotify playlists, how to be pigeonholed,” says Douglas. “Now I’ve started to think, f*ck it, let it be. You’ve just got to love it for what it is,” - a sound world that is theirs and theirs alone.
The brothers met guitarist Chris Newnham, drummer Chris Jones and bass player Tom Farren at the Isle of Wight’s Platform One music college, and moved to Bristol for a time, before island life, its waves and its greater scope for a creative lifestyle pulled them back from the city.

With Jamie busy with his effects pedal, the bulk of their second album’s writing fell to Douglas: he happened to be coming out of a seven-year relationship - with a publicly ugly finale - while living in lockdown with guitarist Chris. The only way of working through it all was on record. And it wasn’t easy - as the title suggests…

It’s Not Comfortable to Grow is a dark piece of work from a band we’re used to hearing in a lighter frame of mind. It starts as it means to go on, with the title track’s powerful vocoder effect - a soft-spoken vocal delivered entirely in chords, it is eerie and haunting - reminiscent, perhaps, of the negative voices and the unanswered questions we all hear on a loop when adjusting to the loss of a loved one. I miss you both so much, it’s hard to close my eyes the voices chime, enigmatically. The song is a slow-growing portrait of dread which bursts out into a stunning drum breakdown featuring two drummers - their own, and Gaspar Sena, a regular on the London jazz scene. The vocoder itself, a 1990s synth modulator, was found by Jamie on one of his charity shop hauls and features across the album, providing a distinctive tone-colour.

It’s Not Comfortable To Grow explores heartbreak from many different angles, in smart refractions of contrasting feeling - from the defiant Disco Wings (“It’s my life and I don’t care if I’m right or wrong”), which is inspired by the moments you see light at the end of the tunnel, to Something Better, their rawest song yet, in which, over a deceptively playful waltz-time riff, Douglas delivers a stunning, semi-improvised monologue of pain.


The band’s appetite for strong melody and a certain musical grandeur constantly offset the intimacy of the lyrical material. It’s Pretty Bad is a refreshingly honest portrait of how long it takes to get over someone once the initial flurry of sympathy has died down. Environmental sounds like experimental Lennon - with a John Grant-style synth break; the breath-taking Elastic Time soars on Max Richterish strings.

Songs explore moments of passing relief - the sun-bleached, sauntering Disposable Love, explains Douglas, is “about wanting to get back to a younger place, a freer place; a feeling of not having much worth, but being nostalgic for that”. And there are journeys into the dark side, such as Epsom Salts: Don’t ask me cos I don’t know why, everything seems to hurt when you’re alive. The band play with big feelings, but the ebbing and flowing of emotion is held together by a blizzard of ambitious music, full of woozy time-changes and vintage analogue wizardry. Older songs were naturally pulled into the project, too, like the talking-point Marbles Pt1 and Marbles Pt2, a double epic, stretching out with brass and strings and written about watching someone you love get married: “We had it for years and never finished it and it suddenly felt right for this album”.

Guitarist Chris found himself more attached to this record than their previous releases, “Whether it was the timing of it, lockdown with us living together, demoing in your pants on a hot day in spring 2020… There were times of being really miserable, but the music was helping me get through it.”
Bass player Tom hears a new creative certainty in the album, something more cohesive and impressive than on their previous records. “The feeling of Douglas’s turmoil is for me what holds it together all the way through; it’s not far off being a concept album,” he says. “It’s very vulnerable.”
As for Douglas himself, “the hard part wasn’t making the record, it was navigating yourself through the process”, he says, which is kind of what you get in the title.

Tracks were written from the start of the first lockdown in March 2020 and recorded in the band’s self-built studio at Douglas and Jamie’s father’s house in Gurnard, near Cowes. But as the world opened up after Covid, a host of guests joined Plastic Mermaids from the Isle of Wight scene. The album features trumpet players Tim Parkin (formerly of The Bees) and David Medland (whose work veers into jazz and hip hop and who tours with the Dub Pistols). A family friend, Jonty Parkes, appears on French horn, and stalwarts of the Isle Of Wight folk scene, Kathy Grimshaw and Becky Haydock, appear on violin. The boys have known Kathy and Becky since they were teenagers. Over the last few years, Douglas has become more interested in brass and strings, “the expressive depth of live orchestral instruments”, as he puts it. On It’s Not Comfortable To Grow, the band have found an appropriate musical setting for feelings bigger than they’ve ever put into song before.

Plastic Mermaids are bursting out of the Isle Of Wight!