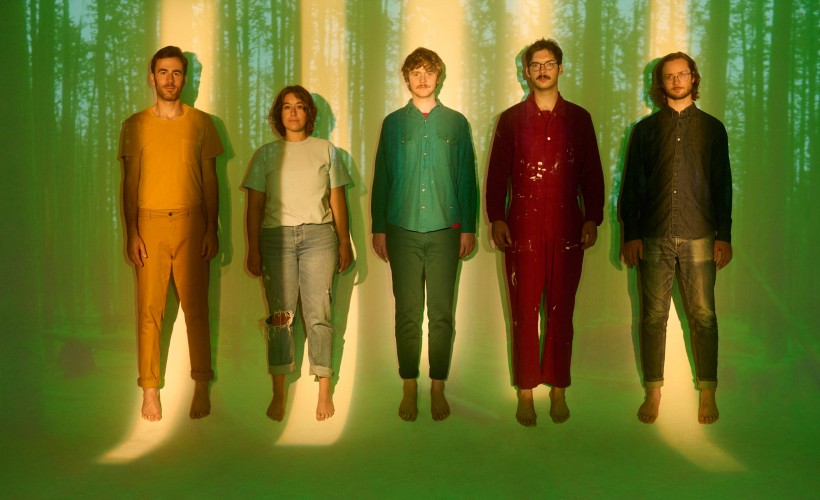 Tweet
Pinegrove will be playing at Manchester Academy 2 on Tuesday 31st of March and SWX at Bristol on Wednesday 1st of April 2020.

Pinegrove’s new album begins with a breath and ends with a shimmering exhalation. In between is Marigold, an urgent, multivalent meditation - and an expanded take on the blend of alt-country, indie rock and cerebral humanism that’s inspired the band’s ardent fan community. Marigold marks their Rough Trade Records debut, offering what songwriter Evan Stephens Hall calls a “heart-first” perspective.

Those familiar with Pinegrove will recognize signature elements of the band’s sound: literary yet conversational lyrics, geometrically interlocking guitars, the dynamic shifting shadows of rhythm and structure. But this effort marks the most spacious, bold, and well defined iteration of the project yet. Marigold is an album that's intense but approachable, with a familiarity that belies an underlying complexity - accessible on first listen and increasingly rewarding upon revisits.

Though Marigold was recorded in the same space as 2018’s Skylight - Amperland, the living-room-turned-studio in the house Evan shares with multi-instrumentalist Nick Levine in rural upstate New York - the process was markedly different. The band took their time isolating instruments and reaching for a more high fidelity result. Marigold is designed to sound cleaner, simplified, immediate.

Without the extra noise, Evan hopes the songs can be “more emotionally direct.” He began writing from “a place of patience,” and the songs became in part about living in that space, about diligently documenting resolution's long arc. This is music carved from the earnest tradition of artistic inquiry: a humble, wide eyed embrace of mystery and beauty in equal measure. It is music that is comfortable walking the path toward self discovery.

Formed in 2010 by childhood friends Evan and drummer Zack Levine, Pinegrove have released three previous albums - Everything So Far (2015), Cardinal (2016), and Skylight (2018) - to massive critical acclaim, garnering them a widespread and devoted listenership. They’ve described their sound as variously as introspective party music, or energetic music in the folk tradition; in any case they have combined catharsis and inventive structures with irrepressible melodies, resonant lyrics and emotive twang. Marigold finds the band expanding into the latter, spreading out over varying tempos and swelling pedal steel. But in surprising moments, the album can suddenly unfold into the band’s heaviest, most unbound offerings yet - a cavalier disregard of genre in favour of something honest and unique.

In late 2017 the band underwent a period of inactivity following a controversy involving an emotionally turbulent time between Evan and a person with whom he was in a relationship. At the request of the person involved, the band cancelled their tour and Hall made a statement detailing the situation and announcing their hiatus. In an interview, Hall stated, “We are thoroughly in favor of the dismantling of patriarchal structures, and the movement right now to elevate survivors and victims of abuse. And we are not interested in a listenership that doesn’t care about that.” With the full consent of the other person involved, the band self-released Skylight, donated the profits to various organizations and charities, and resumed touring.

Zack describes Pinegrove as a constellation of “soulmates.” At 30 years old, Zack and Evan have known each other for 25 years and been playing music together for twenty, communicating via a “telepathic musical connection.” Nearly everyone they work with are friends and collaborators from way back. Marigold features Evan, Zack, Nick, as well as Josh Marre (who, outside of his usual guitar duties, doubles on bass for this record), Sam Skinner, Nandi Rose, Evan’s dad Doug Hall, and Zack & Nick’s dad Mike Levine. Sam also engineered and co-produced the record, as he has on every Pinegrove recording since 2015.

“This is a lifelong project,” Zack says, referring to Pinegrove and something bigger. “We’re always thinking about how to be better humans and humanists. It’s about how to keep going, and to respond to the world as it is right now.”

In album art and lyric symbolism, Evan has often worked in simple, hand-painted geometry and primary colors. Yet on Marigold, there is an allowance for a wider spectrum. The album cover features what he calls a “digital snowstorm,” a span pixelated in yellow and blue, a field that’s both light and dark. The central form is obscure, but you can look closer. You can listen for what’s in-between. And while there is room for ambiguity in Evan's hypnotic storytelling, its thesis is anchored as always in radical empathy. This is music that makes a humble yet confident case for inclusiveness and community, for tenderness and patience in a world that sometimes seems to have other plans.

Pinegrove is currently on the road as a six-piece, featuring Evan, Zack, Nick, Josh, Sam, and Megan Benavente. Pinegrove will release their fourth full-length in January 2020.

PINEGROVE release a video of an acoustic reworking of ‘Phase’