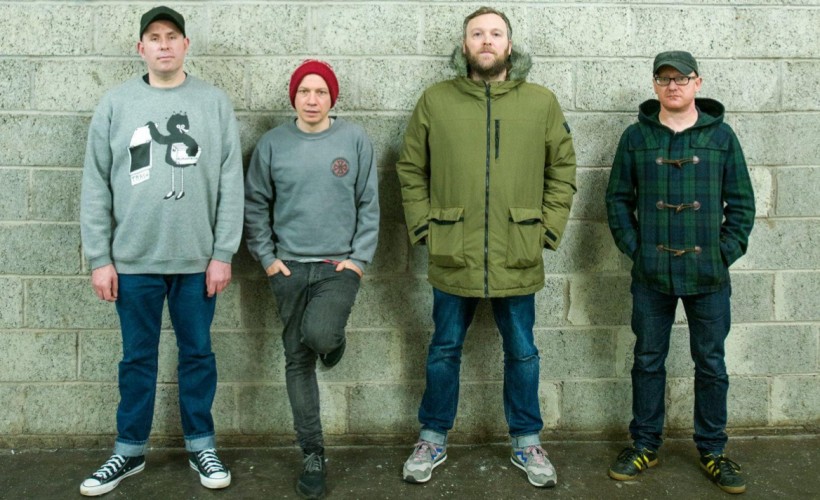 Mogwai consistently prove to be one of the world’s most inventive and awe inspiring bands. Leaders of the Post-Rock movement, each new record release is celebrated as a significant event in the history of contemporary music.

Nine studio albums, a live album and four compilations, four soundtracks, a record label, and a few blown PAs and dislodged pieces of ceiling over uncountable gigs. Over the 24 years since they formed with rehearsals rattling Stuart Braithwaite's living room, Mogwai might have become one of the most important groups of a fragmented but increasingly potent British musical underground, but they've refused to sit back and rest on their laurels.

Over 24 years their one constant has been of a mastery of dynamics, an embracing both of power and minimalism, and a willingness to experiment with new instrumentations and technology. Within that though, one of the most recognisable sonic identities in contemporary music unites the songs as disparate of graceful sung moments like Travel Is Dangerous or epic Black Sabbath temper tantrum My Father My King, the shimmering, or the stately atmosphere of I'm Jim Morrison, I'm Dead... The Mogwai of 2020 is a very different group to the four kids who, in 1996, released their debut single to a musical climate suffering the appalling hangover of late Britpop. Since debut album Young Team the group have always kept their eyes on the future, playing different sets mostly of new material on each night of their never-ending tours. In a commercial climate that hardly favours independent artists operating outside the mainstream, Mogwai have always led by example, doing it themselves, where they can.

“Mogwai, those consistent providers of dirge and delicate depression, have made an excellent follow up to 2011's Hardcore Will Never Die, on which they seem to be recalling a rave of sorts.” - The Guardian


Where can I see Mogwai play live?

Mogwai thrill their fans with the announcement of a string of headline shows, including Albert Hall at Manchester, Rock City in Nottingham and Brighton Dome during February 2023.

Our stocks of Mogwai tickets are expected to sell fast. As you eagerly await their release at 10:00 on Friday 2nd of September, you can set a personal reminder with Gigantic to alert you with a text message or email when they become available.


Where can I get Mogwai tickets?

Mogwai dates are on sale. Do not miss out on seeing the incredible Post-Rock band play live.

Stocks for all events are limited, so you will have to book your Mogwai concert tickets early or run the risk of missing out. Gigantic has been proud to provide excellent customer service for many years, so you know we are the right place to book your essential gig tickets whenever you are planning your big night out.

Mogwai announce gigs in 2023! Get your tickets with Gigantic!

Great performance and fantastic venue,well worth the journey

There were moments went I thought that my teeth might shatter or my chest might explode. Mogwai ran through a great selection of past and current glories. The sound quality was clear and the music played wonderfully well. Yes it was loud as expected but we went back to our hotel with only pleasant tones in our ears. Thankyou Moggers.

That's all we have for Mogwai! Check out their upcoming shows