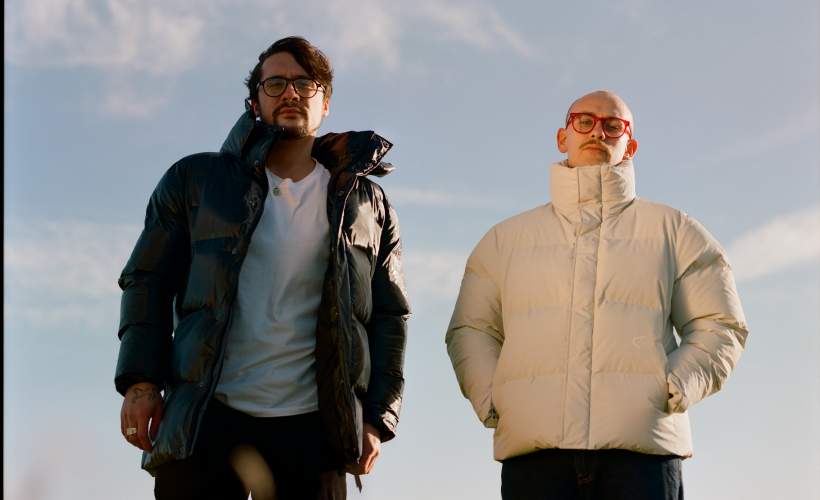 Rap and hip-hop is built on that magical spark that comes when a rapper and a producer connect, seemingly both taking one another to the next level. For Brighton-based duo Frankie Stew and Harvey Gunn, that moment arrived when they were still dreaming of a life in music in between school lessons. Best mates since the age of 15, Frankie and Harvey have spent the past decade slowly but surely bringing themselves up the ranks as part of an entirely DIY duo. Their sound offers a deeply personal mix of producer Harvey’s richly textured beats, which are given an upbeat swing courtesy of U.K. garage drums, and Frankie’s reflective and heartfelt raps, which touch on subjects from coming of age to his mental health. “Some artists spend their lives trying to find that producer they click with,” Harvey says. “We were lucky enough to find one another straight away.”

Together, Frankie and Harvey built a dedicated cult audience that is growing at an organic yet rapid pace. With 51M catalogue streams and nearly half a million monthly listeners, the duo have firmly established themselves with music fans and have been backed by tastemakers including Annie Mac, DJ Target, Huw Stephens, and Steve Lamacq, can count both Jorja Smith and The Streets’ Mike Skinner as co-signs, and have collaborated with Loyle Carner and Ocean Wisdom amongst others.

The pair first bonded over a mutual love of U.K. hip-hop, something of a niche interest during the glory days of grime and the genre’s glamorous U.S. equivalent. Over time their tastes widened, bringing in old soul samples inspired by Madlib’s crate-digging style, and giving it a British sensibility with elements of the underground club culture bleeding through into an unmistakable mix. “I like not being able to put our sound in a box,” Frankie says. “It’s a weird mix of garage music to grime and hip-hop.” They’re the first to admit that their rise has been a steady one, but over time (and a prolific stream of self-released music) Frankie Stew and Harvey Gunn have become a force to be reckoned with, as shown through an impressive live run that includes a sold-out show at London’s Heaven and a headline date at the 2,300 capacity O2 Forum Kentish Town due later in 2021.

Despite spending the past decade grinding their way up, 2020 project Breathing Exercises was the pair’s first studio effort after finally securing a recording space in their hometown. Prior to that they had recorded everything in bedrooms of rented flats and any space their mums could spare them. Going into the making of Breathing Exercises they were at a crossroads; keep making music in between “proper” jobs or quit and put their all into creating the album they knew they were capable of. Inspired by the fans they’d met after gigs on their DIY tours, the people who were taking strength from Frankie’s lyricism and wordplay, they decided to go all in. “That was a major sacrifice,” Harvey says looking back at the making of the album.

Released into the world shortly before Coronavirus and the subsequent global lockdowns took hold, Breathing Exercises crossed over during a time of great upheaval and emotional strife. Suddenly people were taking extra care to look after their mental health and turning to music as the tough reality of living during a pandemic went from seeming temporary to feeling permanent. Frankie’s lyrics on the album, touching on themes of anxiety, stress, panic, and isolation, couldn’t have been more timely. “I want to be a voice for everyone who feels the same way I do,” Frankie explains of his therapeutic style. “There’s no playing to the gallery, it’s just me airing my feelings.”

Frankie and Harvey’s radical honesty is more pronounced than ever on new project Handle With Care, recorded partly in September last year when the pair holed up in a converted barn on a farm in Hazelmere, and back in Brighton in early 2021. With nothing to focus on but making music and looking at sheep across the Buckinghamshire countryside, the pair set to work making something that would reflect the mood of a turbulent year. The result is reflective and downbeat but with a light of hope buried amid the melancholy. Throughout songs such as “Tears On My Window” and “Emotions Dancing” Frankie focuses on themes of freedom, loss and the importance of relationships. “It’s a snapshot project and one that’s very reflective of these times,” he says of the new music. “A lot of people will relate to these universal feelings.”

Handle With Care reaches a head with the cathartic “Dealing With It.” Over sombre piano and a choppy beat, Frankie opens his heart and tells the world “I find it hard but I’m dealing with it.” It’s this simple but meaningful moment where he shares the universal truth that underpins all that he and Harvey represent: that we’re all just trying to get through life as best we can and looking for ways to make life easier for one another. It feels like a warm embrace and a reunion with a friend at once. Frankie and Harvey have had each other their whole lives, for the rest their music is that arm around the shoulder and the priceless feeling that you’re never truly alone.