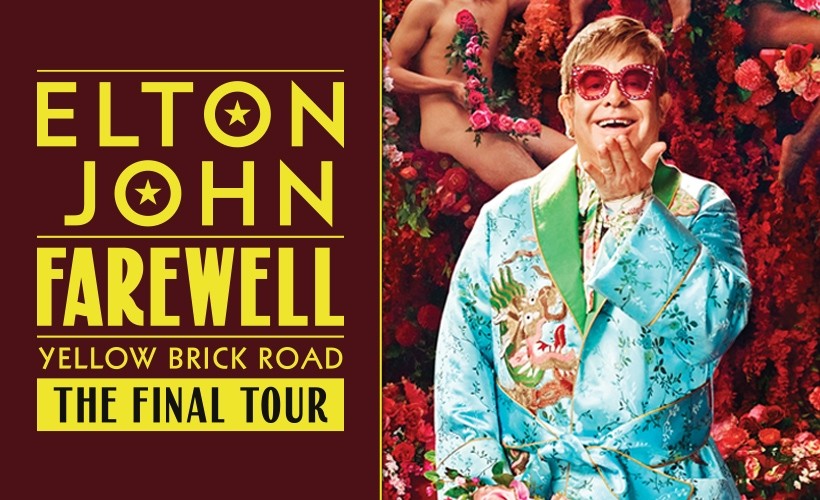 
Elton John is one of the top-selling solo artists of all time with 1 diamond, 40 platinum/multi-platinum and 23 gold albums, over 50 Top 40 hits and more than 300m records sold worldwide. Candle in the Wind 1997 the biggest-selling single of all time, sold over 33m copies. Diamonds the Ultimate Greatest Hits has spent over 175 consecutive weeks in the UK album charts to date. Celebrating 50 years of his songwriting partnership with Bernie Taupin, it was his 40th Top 40 album. Aug 2018 saw Elton named as the most successful male solo artist in Billboard Hot 100 chart history with 67 entries, including nine #1s and 27 Top 10s.

Elton embarked upon the Farewell Yellow Brick Road tour in Sept 2018. Marking a spectacular end to a magnificent career, he will journey to 5 continents to celebrate his retirement after over 50 years on the road. He has delivered more than 4000 performances in over 80 countries since 1970. 2019 saw the release of Rocketman an Oscar and Golden Globe winning motion picture of his life, and his bestselling autobiography Me’ The Elton John AIDS Foundation is one of the top non-profit HIV/AIDS organisations, raising over $450m.

Elton's awards and honours include six GRAMMYs including GRAMMY Legend, a Tony, two Oscars, Best British Male Artist BRIT, Rock and Roll Hall of Fame, Songwriters Hall of Fame, 13 Ivor Novellos, a knighthood from HM Queen Elizabeth II and the Companion of Honour in the 2020 New Year Honours list - one of only 64 people to hold the honour.

It is with great excitement that Elton John announces the final dates for his award-winning Elton John Farewell Yellow Brick Road: The Final Tour in the UK, Europe and North America. Get your Elton John tickets with Gigantic!


The Final Tour has made stops in Europe in major cities such as Milan and Paris before shows in Norwich, Liverpool, Sunderland, Bristol and Swansea next June (tour dates below). Elton will then travel across the pond to take his final bow in North America, playing in major cities including Vancouver, Toronto, Chicago and more.

The North American run included performances at Citizens Bank Park in Philadelphia, and will conclude with back-to-back performances at Dodger Stadium in Los Angeles - commemorating his iconic performance at the historic venue in October 1975.

2023 kicks off with two shows in Auckland New Zealand on 27 and 28 January, followed by soon-to-be-announced dates in Australia before the epic 4-year tour formally concludes there later that year.

Announcing the final dates of his tour on social media, Elton John said, “Hello, all you wonderful fans out there. I’m coming to you today with an announcement I’ve been working towards for, well, all my life: the shows that I announce today will be my final tour dates ever in North America and Europe. I’m going to go out in the biggest possible way, performing at my very best, with the most spectacular production I’ve ever had, playing in places that have meant so much to me throughout my career. Whether it’s next summer in Frankfurt or at the legendary Dodger Stadium for the grand finale in the United States, I can’t wait to see you all on the road one last time. This has been an incredible tour so far, full of the most amazing highs, and I look forward to making more wonderful memories with you at these final shows. To all my friends down under, We’ll be seeing you too. Thank you and I look forward to seeing you in your town.”

Recently winning the 2021 iHeartRadio “Golden Icon” Award, the tour has also received top accolades including the 2020 iHeartRadio Music Award for “Tour Of The Year,” 2020 Pollstar “Major Tour of the Year” and the 2019 Billboard Music Award for the “Top Rock Tour.” The Elton John Farewell Yellow Brick Road Tour kicked off to a sold-out crowd on 8 September, 2018 and has since received rave reviews around the world. The critically acclaimed show takes the audience on a magical journey through his incredible 50-year career with never-before-seen-photos and videos, all set to the tune of some of Elton’s most beloved songs from his legendary catalogue including, ‘Bennie and the Jets,’ ‘Rocket Man,’ ‘Tiny Dancer,’ and ‘Philadelphia Freedom.’

Give your loved ones the gift of Elton John tickets this Christmas!

Searching for Elton John tickets? Get yours at Gigantic!

Last chance to get Elton John - on sale now with Gigantic!

So glad I made it to this concert! Elton was pitch perfect the entire 3 hours and mesmerising to watch. His band were on fire and the extended versions of a few of the tracks were outstanding. Great service from Gigantic tickets too. Your email updates are definitely appreciated and the info on the park and ride was very helpful.

That's all we have for Elton John! Check out their upcoming shows