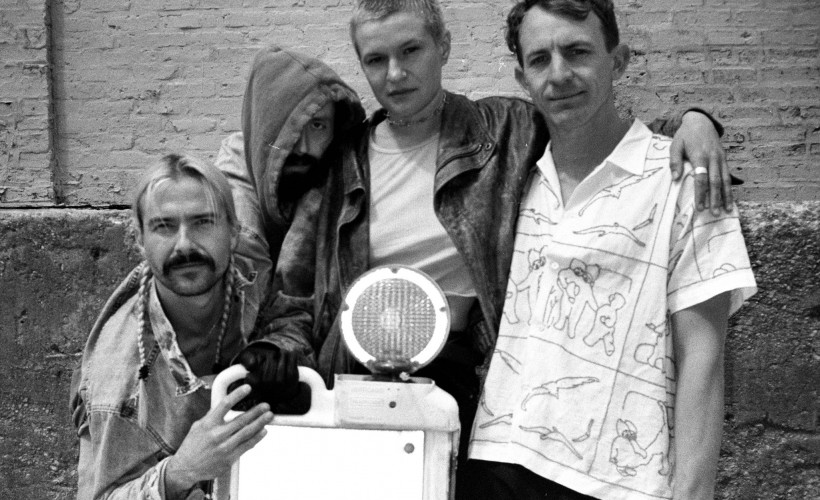 Who are Big Thief?

30 miles west of El Paso, surrounded by 3,000 acres of pecan orchards and only a stone’s throw from the Mexican border, the band Big Thief (a.k.a. Adrianne Lenker, Buck Meek, Max Oleartchik, and James Krivchenia) set up their instruments as close together as possible to capture their most important collection of songs yet. The band had only just finished work on their 3rd album, U.F.O.F. -“the celestial twin”- days before in a cabin studio in the woods of Washington State. Now it was time to birth U.F.O.F.’s sister album -“the earth twin”- Two Hands.

In sharp contrast to the wet environment of the U.F.O.F. session, the southwestern Sonic Ranch studio was chosen for its vast desert location. The 105-degree weather boiled away any clinging memories of the green trees and wet air of the previous session. Two Hands had to be completely different - an album about the Earth and the bones beneath it. The songs were recorded live with almost no overdubs. All but two songs feature entirely live vocal takes, leaving Adrianne’s voice suspended above the mix in dry air, raw and vulnerable as ever. Where U.F.O.F. layered mysterious sounds and effects for levitation, Two Hands grounds itself on dried-out, cracked desert dirt.

Anybody who has borne witness to Big Thief in the wild will find songs they recognize here. Much of the album’s tracks (“The Toy”, “Those Girls”, “Shoulders”, “Not”, “Cut My Hair”) have been live staples for years. “Two Hands has the songs that I’m the most proud of; I can imagine myself singing them when I’m old,” says Adrianne. “Musically and lyrically, you can’t break it down much further than this. It’s already bare-bones.” Lyrically this can be felt in the poetic blur of the internal and external. These are political songs without political language. They explore the collective wounds of our Earth. Abstractions of the personal hint at war, environmental destruction, and the traumas that fuel it. Lyrics like “And the blood of the man who killed my mother with his hands is in me/ it’s in me/ in my veins” are genuine attempts to point the listener towards the very real dangers that face our mother planet. When Adrianne sings “Please wake up,” she’s talking directly to the audience. “Attention is power,” she says. “I believe you can manifest something on the other side of the world just by using your power well.”

Engineer Dom Monks and producer Andrew Sarlo, who were both behind U.F.O.F., capture the live energy as instinctually and honestly as possible. Sarlo teamed up with James Krivchenia to mix the album, where they sought to emphasize raw power and direct energy inherent in the takes. The journey of a song from the stage to the record is often a difficult one. Big Thief’s advantage is their bond and loving center as a chosen family. They spend almost 100% of their lives together working towards a sound that they all agree upon. A band with this level of togetherness is increasingly uncommon. If you ask drummer James Krivchenia, bassist Max Oleartchik or guitarist Buck Meek how they write their parts, they will describe - passionately - the experience of hearing Adrianne present a new song, listening intently for hints of parts that already exist in the ether and the undertones to draw out with their respective instruments. It is an honor to give life to these intricacies.

With raw power and intimacy, Two Hands folds itself gracefully into Big Thief’s impressive discography. This body of work grows deeper and more inspiring with each new album. While you listen, let your own two hands rest in front of your body with palms facing inward and see what power grows between them.


Where can I see easy Big Thief live?

Big Thief announce their huge tour for the new year! Hitting the road in April, their major headline dates include:

Everyone is after Big Thief gig tickets so with limited supplies available you need to book quick or risk missing out on seeing this rising stellar band hit the stage. Gigantic always offers the very best gig tickets, so stick with us for a great selection and an exciting experience.

How can I get my Big Thief tickets?

Big Thief gig tickets can be yours when you book through Gigantic! Set an event to be ready for the release of Big Thief tickets at 10:00 on Friday 16th of September.

We are passionate about music, and you can get Big Thief concert tickets, book for the best gigs, festivals and more with Gigantic!

Stay updated, and get the latest live music news when you LIKE/FOLLOW Gigantic on Twitter, Facebook and Instagram. Tag Gigantic in your best pics using #GiganticGigGoer

New York has always been synonymous with cutting edge cool and now the Big Apple has a new indie band you need to know; Big Thief. Their evocative music places them in the forefront of folk rock.

Having enjoyed massive success with the release of their incredible debut album; Masterpiece in 2016 followed by their awesome albums Capacity, and U.F.O.F., they now make a triumphant return to the UK to play very special headline shows in support of their brand-new album Two Hands.

Excitement is quickly building and many people are looking to get their hands on Big Thief tickets. With demand so high, we recommend you book early or risk missing out. Fortunately, placing your gig ticket order is made easy as you can access Gigantic 24/7 using your computer, smartphone or tablet whilst relaxing at home or busy on the move.


Brooklyn band Big Thief have been quick to burst on to the scene and impress just about everyone.

Their debut album aptly entitled Masterpiece immediately amazed the critics upon release in 2016.

“Even when the road backwards gets unbearably dark, this record feels like a hero's journey." - Jon Dolan, Rolling Stone

It was followed a year later by their stunning second LP Capacity.

“Capacity is both a logical successor to Masterpiece as well as a great leap forward for Big Thief. The chemistry that Lenker and her band have established on album number two is extraordinarily strong, but no matter how good they get, her songwriting seems as though it will forever be raw to the core." - Exclaim

“Their third and undoubtedly best album, U.F.O.F., a mesmerizing flood of life filtered down into a concentrated drip." - Pitchfork

“Big Thief’s most empathic and ethereal work yet. U.F.O.F. is by no means an album that will grab for your attention, it just rests in the atmosphere like a wavelength, waiting for you to tune in - and you’ll be richly rewarded when you find it." - The 405

Everyone is after Big Thief concert tickets so with limited supplies available you need to book quick or risk missing out on seeing this rising stellar band hit the stage. Gigantic always offers the very best gig tickets, so stick with us for a great selection and an exciting experience.

Come to Gigantic to get the best gig tickets - Big Thief on sale this week!

Get tickets for Big Thief with Gigantic!

Good performance all the best tunes good crowd £25 for a tee shirt is a rip off but I wanted one so my own fault really. I love Rock city great venue cheap tram ticket, Nottingham is so far ahead of the rest of the midlands Rescue rooms Bodega...

One of the best gigs I’ve ever been to. Something very special happened.

That's all we have for Big Thief! Check out their upcoming shows