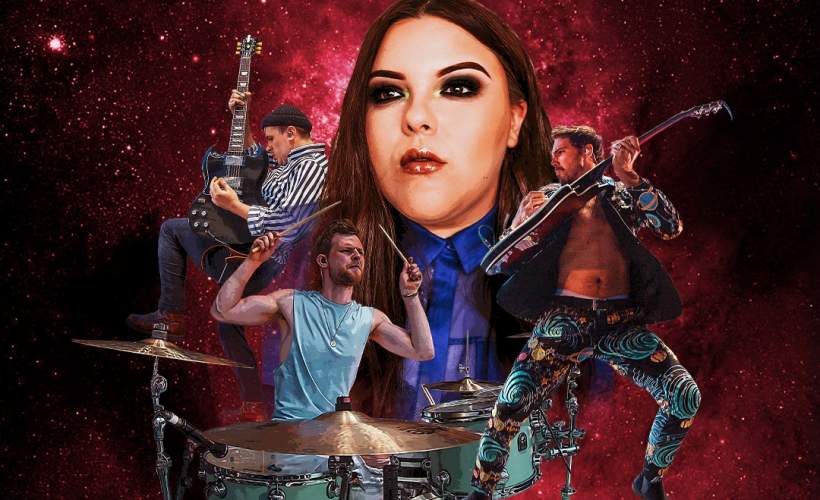 Following their opening performance on the main stage Isle of Wight Festival to “record crowds” and supporting pop icon P!nk on her 2019 European tour, Bang Bang Romeo now they announce a major tour!

You can see them smash it at The Mash House in Edinburgh, The Leadmill at Sheffield and Manchester Club Academy during October 2020.

“The most formidable front woman I’ve seen, talk about charisma, presence and a voice to match” - Gordon Smart, Radio X

Fronted by vocal powerhouse Anastasia Walker and featuring Ross Cameron (guitars) and Richard Gartland (drums), Bang Bang Romeo are a propelling force for female-fronted bands and an open voice for the LGBTQ+ community.

Anastasia's "once in 20 years voice" is unrivalled and the group's larger-than-life performances are sending audiences wild up and down the country, leaving them with jaws dropped or reduced to tears.
We are as excited as the fans to be able to off you Bang Bang Romeo tickets. As an award-winning ticket vendor, Gigantic can offer you fantastic customer service to help you select from an ever-growing massive selection of the hottest gig tickets which you can book through our site 24/7 using your tablet, smartphone or computer.


The ability to create a wonder-filled world of their own is one that has been possessed by some of music's most exciting and memorable artists, from David Bowie to Radiohead and many more in between. Doncaster's Bang Bang Romeo are adding their name to that list, melding drama, dark euphoria, stratospheric tunes and cinematic finesse to transport their fans to another planet.

Fronted by vocal powerhouse Stars Walker and featuring Ross Cameron (guitars) and Richard Gartland (drums) Bang Bang Romeo are a young propelling force for a new wave of UK artists and a strong and open voice for the LGBTQ+ community. Stars is being hailed as having a ‘once in 20 years voice’ and the band’s larger-than-life performances are driving audiences wild up all over Europe.

2018 saw Bang Bang Romeo play over 150 shows - their main stage-opening set at the Isle Of Wight Festival drew the biggest audience for a first-on act in the festival's history (according to John Giddings - festival owner). Their other main stage appearances included Tramlines, Victorious, second stage at Kendal Calling, headline slots at Y-Not & Truck and main stage at Doncaster, Cardiff and Leeds Pride.

For 2019 the band joined P!nk on her Beautiful Trauma World Tour - P!nk herself made the selection to include Bang Bang Romeo on the tour and the band played their hearts out to new fans at Wembley Stadium (2 nights) and Berlin Olympiastadion, in-amongst which they were interviewed by Sky TV on the Breakfast sofa. In addition to performing in front of 1.3 million people in the biggest stadiums across Europe the band performed to a frenzied crowd at Rock Werchter and were main support to Sting at the Montreux Jazz Festival and Foire Aux Vins Festival. At M.J.F. Shania Twain watched their show and is now a fan!

The band’s debut album A Heartbreaker’s Guide To The Galaxy was released on November 1st and went straight into the iTunes Alternative Charts at #4 and #29 in the overall iTunes Charts. They celebrated the launch with an appearance on Sky TV’s breakfast show ‘Sunrise’ and a full front-page with feature interview in Attitude Magazine.

Over its 13 songs, 'A Heartbreaker's Guide To The Galaxy' serves as an addictive, wider introduction to the band, packed with tracks that deliver rousing, anthemic hooks while carrying important and emotional messages. A highlight is the track ‘Love Yourself’ which was co written with and features Example (Global #1 artist). The song is being well received by radio and press and continues to deliver the band’s message of self-love and positivity. The beautiful artwork is designed by the bands drummer and graphic artist - a perfect demonstration of the hard work and artistry that goes in to everything they do.

The band signed a worldwide deal with Better Noise (home to the likes of Blondie, Nelly Furtado and Papa Roach) and for their debut album - recorded in Birmingham, New York and Los Angeles - they worked with a roster of industry heavyweights, including producers and co-writers Example, Nicholas RAS Furlong (Avicii, All Time Low), American Authors guitarist James Shelley and New York's Heavy (Goo Goo Dolls. Meanwhile, the record has been mixed by Grammy winner Mark Needham (The Killers, The 1975), and mastered by Howie Weinberg (Arctic Monkeys, Beastie Boys, The Clash). The band are currently working on tracks with Rhianna and Calvin Harris writers.

The band played their biggest headline tour to date in the UK in October - in partnership with Live Nation / Metropolis - and it was a sell-out success. Promoters from across Europe are inviting them back after seeing their performances supporting P!nk and festival bookings for 2020 are already coming in, including SXSW and Mad Cool.

As there are only limited Raymond Froggatt, concert tickets available you will need to act fast and book quickly. Gigantic has been proudly providing excellent customer service for over ten years. That level of experience and dedication means we are the right place to book your essential gig tickets whenever you are planning your big night out.