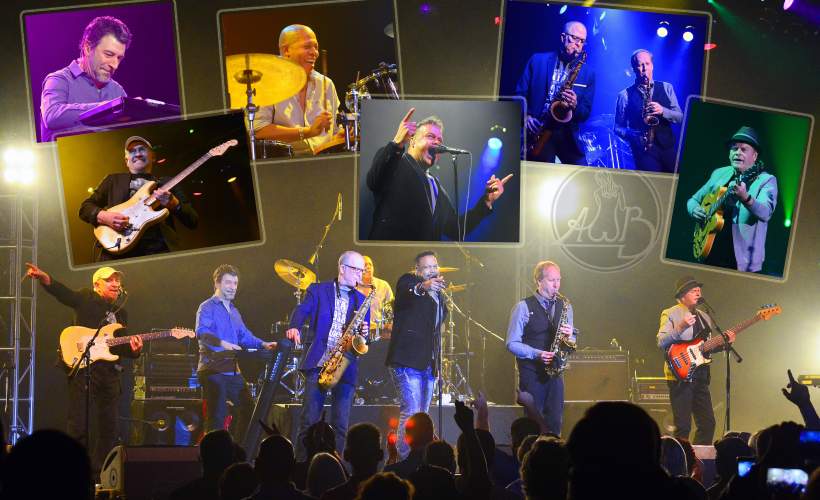 hi, what a concert. the first half was getting to know the new songs from old but second half unbelievable. What a voice the singer had everyone swinging and singing.great concert.
star quality.

Average White Band have just announced a tour for the new year which takes them to Tramshed at Cardiff, Royal Albert Hall in London, Tyne Theatre at Newcastle, Northampton’s Royal and Derngate, Birmingham Town Hall and De La Warr Pavilion in Bexhill during September 2019.

Get excited, because Gigantic can now offer you Average White Band tickets. But do not hang around because demand is high and they will sell out very quickly. Fortunately, we make placing your gig tickets order nice and easy by enabling access to our site 24/7 using your computer, smartphone or tablet whilst relaxing at home or busy and on the go.


Their self-effacing name to the contrary, Average White Band was anything but -- one of the few white groups to cross the color line and achieve success and credibility playing funk, with their tight, fiery sound also belying their Scottish heritage, evoking American R&B hotbeds like Detroit, Memphis, and Philadelphia instead. Singer/bassist Alan Gorrie, guitarists Hamish Stuart and Onnie McIntyre, tenor saxophonist Malcolm Duncan, keyboardist/saxophonist Roger Ball, and drummer Robbie McIntosh comprised the original Average White Band lineup. Veterans of numerous Scottish soul and jazz groups, they made their debut in 1973 as the opening act at Eric Clapton's Rainbow Theatre comeback gig, soon issuing their debut LP, Show Your Hand, to little notice. After adopting the abbreviated moniker AWB, a year later the band issued their self-titled sophomore effort, topping the American pop charts with the Arif Mardin-produced instrumental "Pick Up the Pieces." The record's mammoth success was nevertheless tempered by the September 23, 1974 death of McIntosh, who died at a Hollywood party after overdosing on heroin.

Ex-Bloodstone drummer Steve Ferrone replaced McIntosh for AWB's third album, 1975's Cut the Cake, which scored a Top Ten hit with its title track as well as two other chart entries, "If I Ever Lose This Heaven" and "School Boy Crush." (Put It Where You Want It, issued later that same year, was simply a retitled and repackaged Show Your Hand.) With 1976's Soul Searching, the group reclaimed the full Average White Band name, scoring their final Top 40 hit with "Queen of My Soul." Following the live Person to Person, they issued Benny & Us, a collaboration with soul legend Ben E. King. However, after subsequent outings, including 1978's Warmer Communications, 1979's Feel No Fret, and 1980's Shine, failed to recapture the energy of AWB's peak, the group dissolved in 1982, with Ferrone later joining Duran Duran and Stuart recording with Paul McCartney. Gorrie, Ball, and McIntyre reformed Average White Band in 1989, tapping vocalist Alex Ligertwood for their comeback effort Aftershock. Oft-sampled by hip-hop producers throughout the 1990s, the group continued touring prior to releasing Soul Tattoo in 1996. The live album, Face to Face, followed three years later.

With only ever limited tickets available for any event, we really do urge you to book your Average White Band concert tickets early before they are all snapped up. Offering you superb customer service on a wide selection of essential gig tickets, Gigantic should always be your first stop whenever you are booking your big night out.