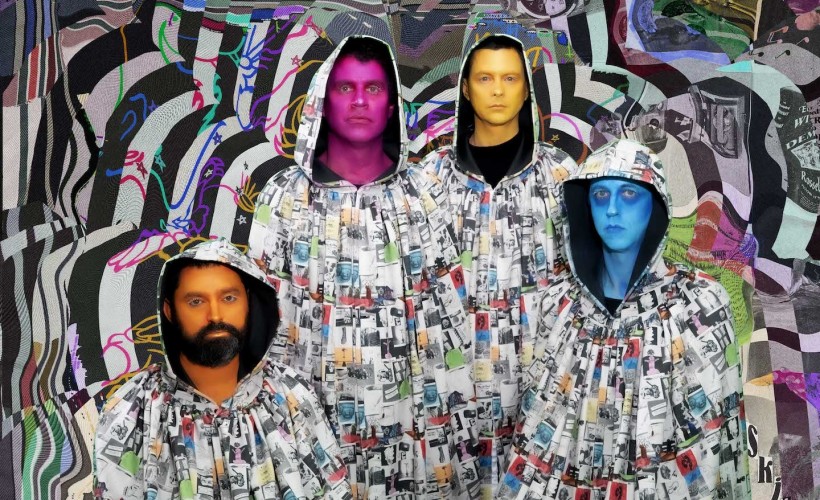 Animal Collective are the beloved experimental indie rock band made up of Avey Tare (David Portner), Panda Bear (Noah Lennox), Deakin (Josh Dibb), and Geologist (Brian Weitz). Boldly playing with folk, electronica and psychedelic explosions of noise which has earned them a loyal fanbase around the world.

They revisit their classic album Sung Tongs at a very special London show held at The Troxy on Tuesday 12th of June 2018.

Gigantic is thrilled to be able to offer you Animal Collective tickets. But as the word spreads the demand grows. So, make sure you are quick off the mark and book your tickets before they are all taken. Placing a booking is made easy as you can visit Gigantic 24/7 using a tablet, computer or smartphone whilst relaxing or when on the go.

Animal Collective were formed in Baltimore County, Maryland, by longtime friends and musical collaborators Avey Tare (David Portner), Panda Bear (Noah Lennox), Deakin (Josh Dibb), and Geologist (Brian Weitz). With a penchant for genre-hopping and studio experimentation, the group began drawing comparisons to everyone from the Residents and the Flaming Lips to the Incredible String Band and the Holy Modal Rounders. Solo and side projects proved to be a continual occupation for most of the group's members, particularly Panda Bear (Young Prayer, Person Pitch) and Avey Tare (Pullhair Rubeye, Avey Tare's Slasher Flicks), but Animal Collective proved to be the most successful of all the musicians' ventures.

Their output has been prolific, and their latest release is the critically acclaimed album Painting With.

“This is a lush, intellectual and brilliant collection, constantly teeming with sounds, innovations and ideas.” - The 405

With only limited supplies of Animal Collective concert tickets being made available you cannot hang around as they will go quickly and you do not want to be disappointed. Award winning ticket vendor Gigantic has been providing excellent customer service for ten years so you know we are the right place to get your essential gig tickets whenever you are booking for your big night out.

That's all we have for Animal Collective! Check out their upcoming shows